It has been years since I visited the zoo in Emmen and haven’t been there at all since in changed to the ‘Wildlands’ zoo experience it now is, so as Monica had visited the zoo several times now, this was a great time for her to guide me through the zoo. 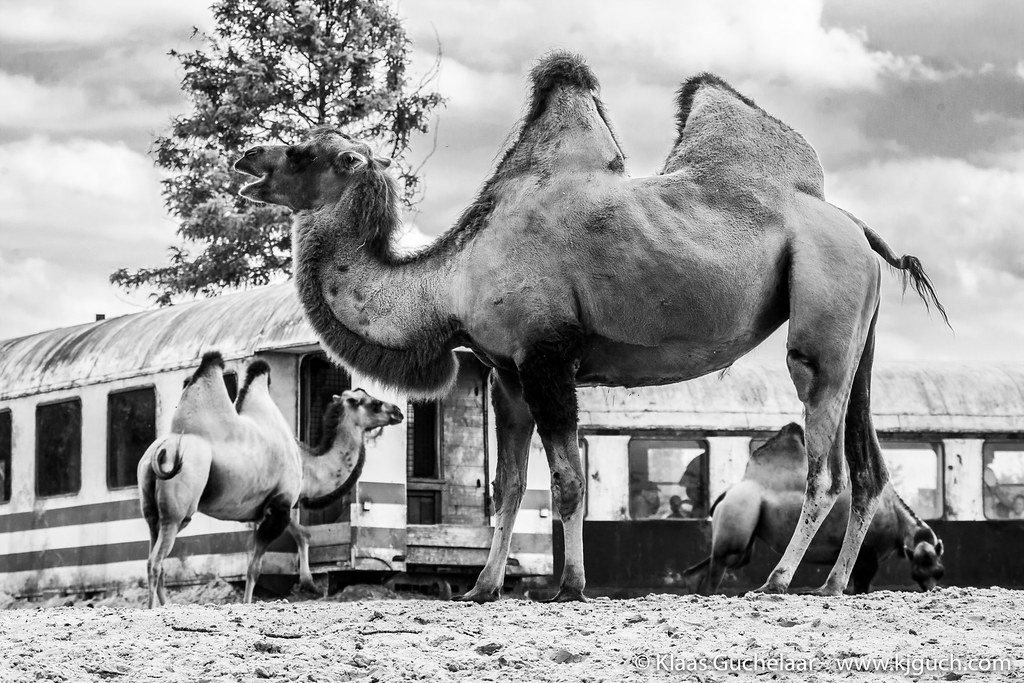 A nice warm Sunday with a busdrive from Assen to Emmen took us nearly to the gate of the zoo (if it weren’t for some sports-event, more on that in another blog) and not much later we were in Wildlands.

It is an amazing park and looks nothing like the old zoo. A few less species, but a much more open space for the animals to roam. Every area in a specific theme.

For the polar bears, seals and penguins there is water to spare. But as it’s sunny the penguins took the opportunity to do some sunbathing on the rocks. The polar bears at least were splashing about in the water.

Walking to the desert-area, we first pass the location for the prairie dogs (or pretty dogs as they do love posing for a photo). These cute little animals have no shame or fear for men and scatter about on the hills in their area or on the walking paths, where we tall humans wander too.

We next arrive at the ‘desert’, where camels roam and the much loathed ostriches (there’s an incident involving an ostrich in Emmen, me and a winter-glove that was stolen and I still want it back!). You can walk through their living area too, but to avoid any more winter-gloves being stolen, you walk through a set of old train-carriages. It looks great from the inside and outside.

From here you easily reach the living area of the giraffes, the rhinos, zebras and some other animals. Their area is large and there’s a little safari-train going through there. It’s too busy right now, so we walk through the park a bit more. There is plenty to see!

An stop in the butterfly zone is an absolute must. The butterflies fly and float freely around and with patience (and the right colour of clothes) they’ll happily land on you as many visitors noted (not me however, I’ll were my roses-shirt next time). Really nice for a short visit.

We reach the ruins where the baboons rule. The elder males oversee their flock and… well, that’s about it. Unless one of the little baboons gets a little too naughty and needs setting straight. The lady baboons take care of the children and groom the male baboon’s fur.

A little further along is where we see the lions den, but the lions aren’t too active. The most excitement is when mother lion raises her head, looks left and right and then goes to sleep again. Even the two little lions can’t be bothered to move. So we let them in peace and pass the little Squirrel monkeys.

We get to the big birdcage to see parrots and other birds. Here too the parrots fly freely in their large cage and if you’re lucky they’ll land on you. If you’re less lucky, something else will land on you though… When it’s too humanly crowded, the parrots shy away, but with less people, the birds come out again. Wise animals indeed.

Next to the parrots we find spider-monkeys, ring-tailed lemurs and baby elephants. Also there is a restaurant where we take our lunch. It’s good you’re allowed to bring your own food (up to some point) as the restaurants aren’t that cheap and for a big family that might just be too much. However I get a nicely prepared wok-dish from the restaurant. Afterwards we see that the line for the boat-trip is non-existent and so we run for the boats that gets us even closer to the baby elephants. Also the spider-monkeys are great to see from the boat.

Basically we’ve seen it all now, but with time to spare we walk a bit of the park again to see the big elephant, to have another look at the lions and to do the safari-ride though the area with the rhinos and giraffes. A great, great day and I’m sure we’ll come back. Even if only because I failed to do the Wildlands Tweestryd ride!

And then we left the animals in Wildlands to go see wild ‘animals’ on two wheels at De Gouden Pijl, the cycling event of Emmen.