This weekend is the 2018 edition of the Swingin’ Groningen festival and every year I try to at least get one night in and this year I visited on Friday evening as that had the best part of the program for me. 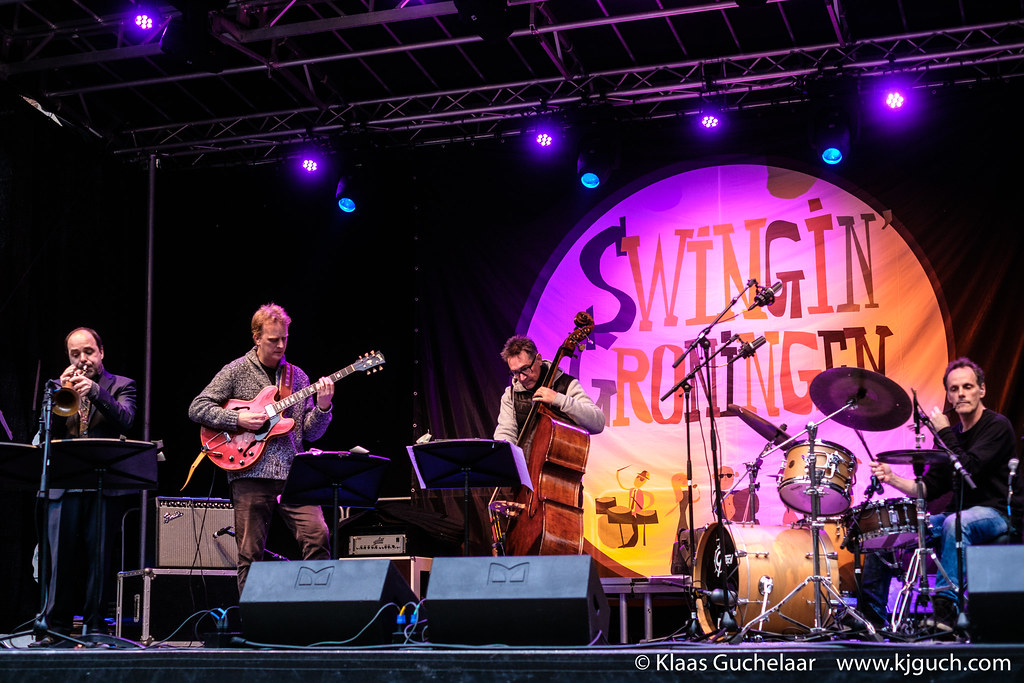 Swingin’ Groningen focusses on various musical styles although generally Jazz is at the base of it, however you’ll also find blues and soul. The main thing is that the music swings and that’s the best base for any music if you ask me!

When I arrived the Steve Altenberg Band was already playing at the Waagplein stage. Steve Altenberg is a drummer and composer and his career spans over thirty years. It’s pure jazz, very fluent and with terrific solos by the quartet.  Next to Steve there is  Kurt Weiss on trumpet, Thomas Hilbrandie op guitar and Paul Berner on double bass. A terrific start of the evening.

As an extra I added a set of black&whites of the concert as I also liked the series in black&white:

There is more to be seen though and near the end of the set I make my way to the Ellebogen stage for the gig by The Professionalz.

Behind the drums here is Lucas van Merwijk who’s career also counts over 30 years. Lucas has several Dutch elections of ‘Best World/Fusion drummer’ to his name and studied Afro-Cuban drumming in Cuba with Oscarito Valdes.

Lucas shares the stage with Ed Verhoeff on guitar and Arno Krijger on hammond. Their songs are all around the 3 to 4 minute mark, so no half an hour solos, but short snappy songs within the jazz and fusion structures. Terrific music and the solos -short as they are- are fantastic. As a Pink Floyd lover myself I quite loved their version of Money.

Back at Waagplein we were going to be treated to blues! Erwin Java is a Dutch blueslegend in his own right. In the early 80’s he played with Herman Brood  and in the late 80’s he joined Muskee Gang with Harry Muskee (of Cuby & The Blizzards fame) and so when Cuby & The Blizzards reformed Erwin came along and stayed with that band as guitarist until 2011 when Harry passed away. Erwin then became part of King of the World and only this year Erwin announced to leave that band to form his own band the Erwin Java Band. A 40 year career up until now and that’s pretty impressive.

He has Tineke Schoemaker and Ralph de Jongh with him on vocals tonight. Tineke is the lead singer of Barrelhouse, a band that’s been around since 1974 and to this day still exists. It’s been years since I saw them and it’s good to see Tineke on stage again.

And with that Ralph de Jongh, Harry Muskee’s ‘protege’, is the youngster on stage. He more than makes up for that in talent and I’ve seen enough gigs by Ralph to know he’ll deliver. It was a fantastic blues concert with (of course) several Cuby covers. Great guest spots by Tineke and Ralph and superb performance by the band.

Then to my last concert of the evening at Poeleplein: The Tibbs; a soul band strongly influenced by the 60’s American Nothern Soul and Memphis Soul. A terrific band with a great brass section and the lovely Elsa Bekman on vocals.

It’s a great band to see on stage. The soul music with brass is already festice, but the amazing lightshow they added here really makes it spectacular. I saw the band once before in 2014 and seeing them now I realise I should have seen more often. Really, really good gig.

It was again a fantastic edition of the festival. Unfortunately I went home just a bit too soon as I really should have visited MF Robots as well I found out later, but if they come back I’m absolutely going to see them too, and that’s a promise!