I wasn’t able to make it to Barcelona in time for my birthday this year, so I went a bit later to celebrate my 42nd with Monica in a better climate then I had in the Netherlands.

While I say ‘better climate’ it wasn’t that much better, but well enough to feel a bit closer to spring. But although I did see several tourists walking around in t-shirts, I was happy I had my jacket on me!

I haven’t done too much photography this time. I’ve been in Barcelona so many times now and this time I didn’t want to run around, camera in hand all day every day. It was just a week out with opportunities to relax and enjoy a bit.

That didn’t mean I didn’t take any photos of course… I arrived on the 14th of March and as Monica went to work on Thursday I had a slow day. I started with a visit to the Lo Spazio gallery in Balmes where a photo exhibition by Luca Catalano Gonzaga was on display. A series of gorgeous photos about a sadly rather tragic subject of human suffering. 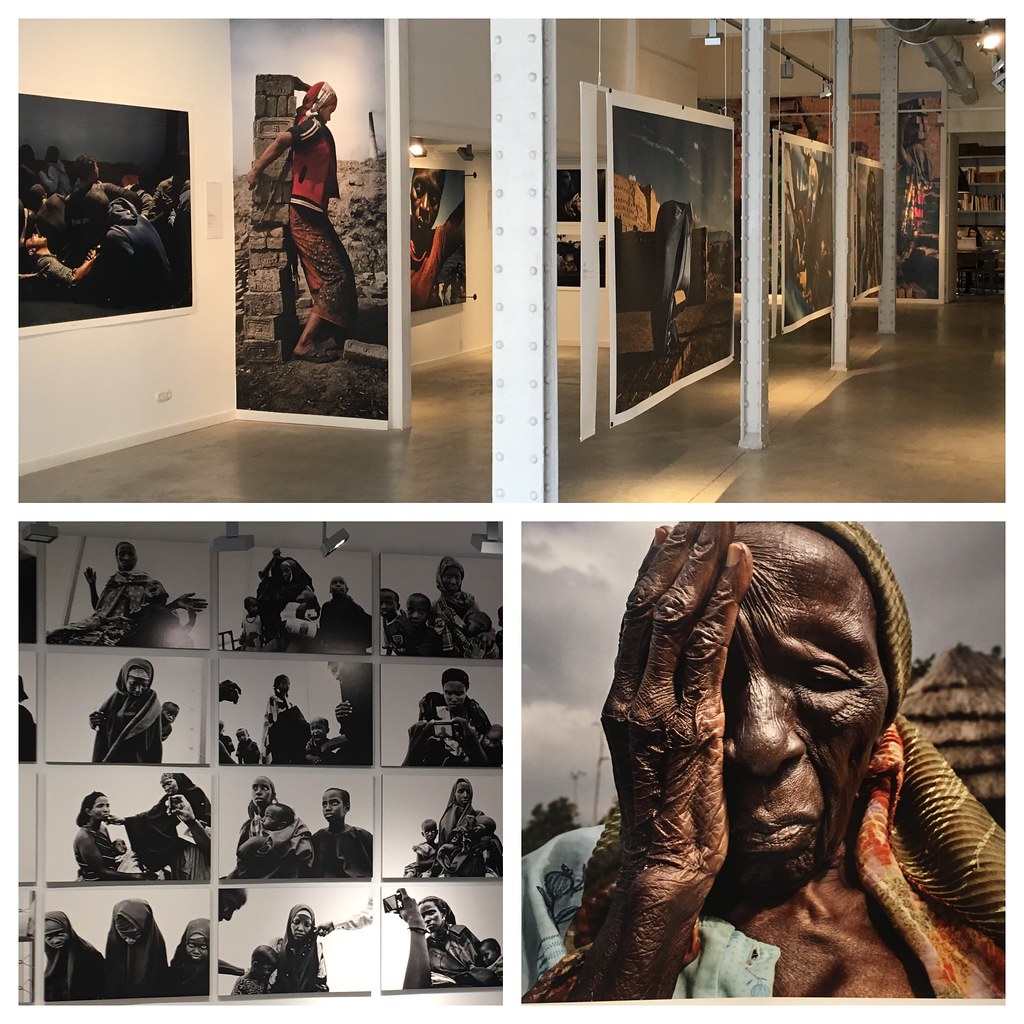 I then walked around a bit, had some espressos and found a park. There are so many of them in Barcelona and it’s really beautiful to have a bit of green in all that stone and concrete of the city. For Lunch I met with Monica and after I brought Monica back to the trainstation and was on my way exploring Barcelona again. 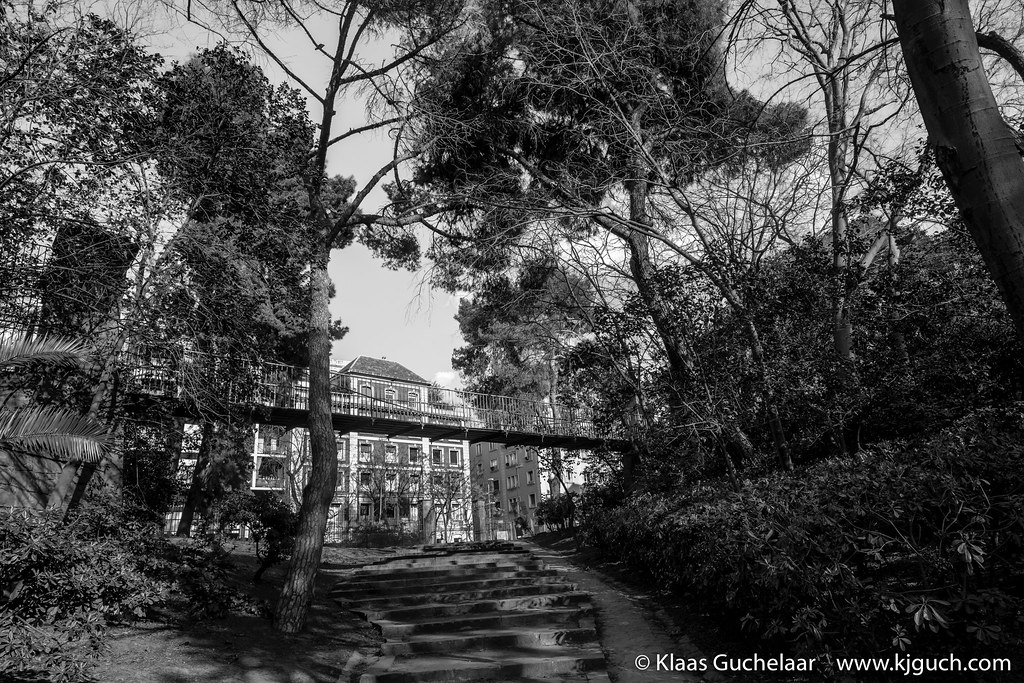 And after some walking I found the On Y Va coffee/espresso bar. It took a while as there are two On Y Va locations. One sells bicycles and the other coffee. I found the bike store first of course ;) The espresso bar was close to Monica’s work and as I was there in the end of the afternoon I waited for Monica to finish work and we walked home together. 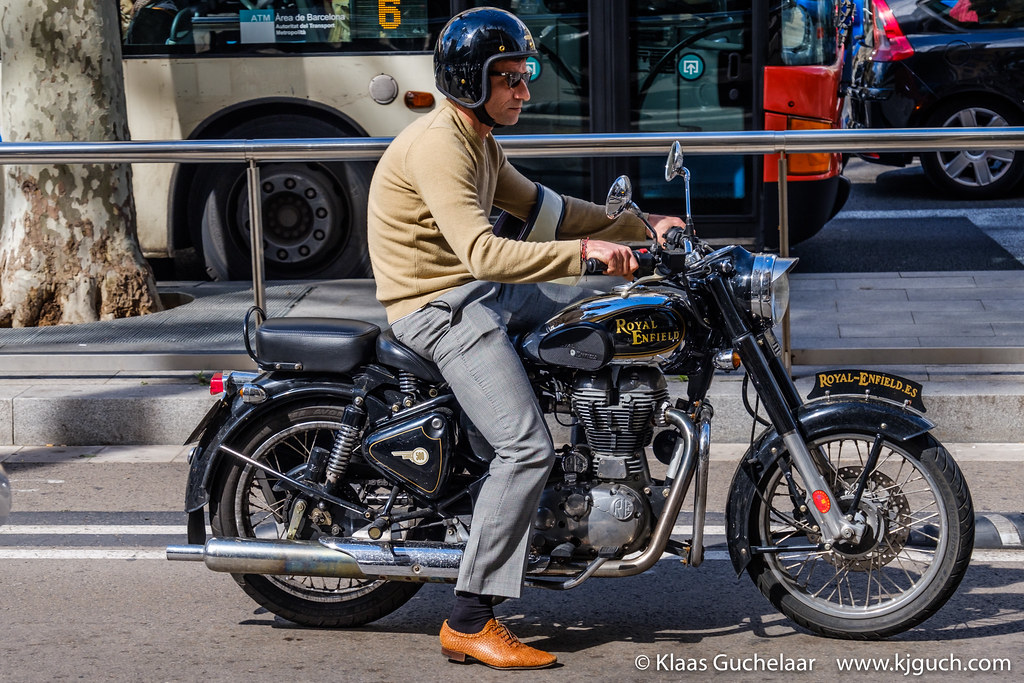 In the evening after a good restaurant we headed to Jazzman for the first of a few concerts. More on that here.

On Friday I sleep in (quite a bit actually) and visit another gallery. This time Brassai, from the early days of photography. Very much a different style from the exhibition I saw the day before, but by no means less impressive. 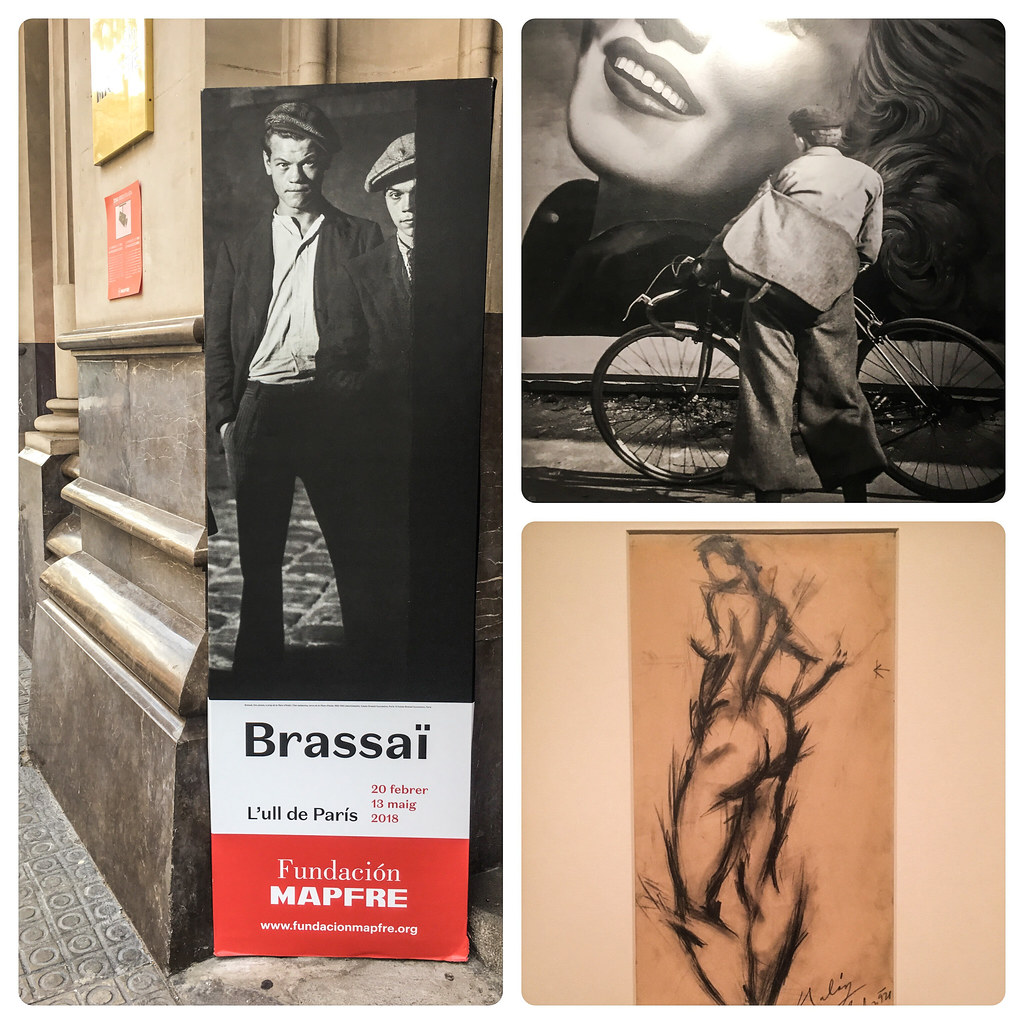 For the rest I tried a bit of candid-photography. Shooting off-the-cuff but as I found out I need to a little work a bit on that as most of the photos turned out to be shot at an angle. That might work in some cases, but if they’re all like that, it’s a bit too obvious. 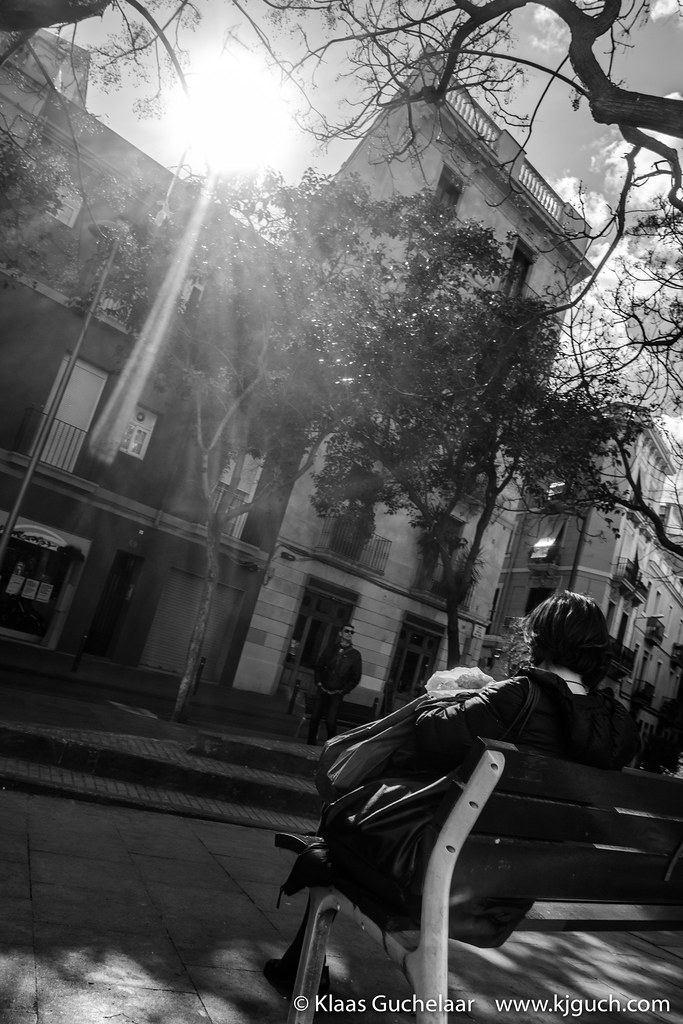 Not much later Monica’s weekend started and we went out again into Barcelona ending the evening in Soda Acustic for the second concert, that’s in this post.

Saturday was a nice and quiet day and in the evening with some difficulty we managed to get into an Irish bar where it was as good as impossible to order a Guinness. It was St. Patrick’s day and with all the Irish bars in Barcelona we just had to visit one. 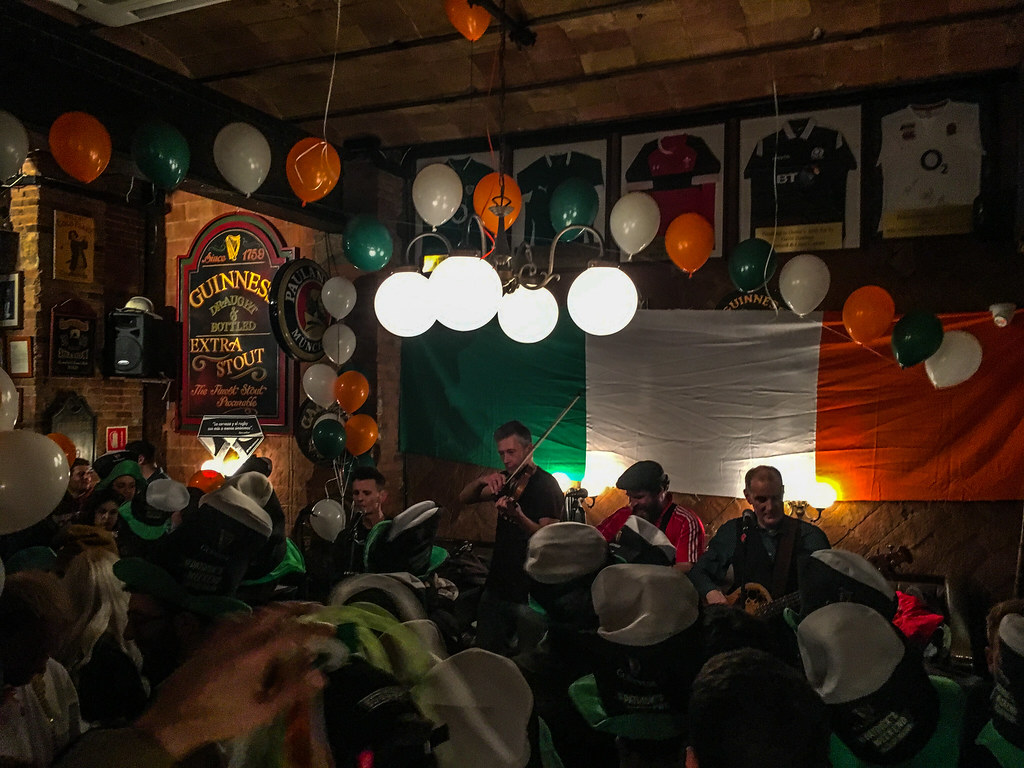 We ended the day with a third concert, this time in a packed Harlem Jazz Club. Photos of that over here.

We found an ‘Independed Label Market’ and that was nice to rummage through loads and loads of vinyl albums. With a bar and DJ’s on the music it was a nice little event. To take in a bit of the last sun of the day, we headed to the beach. The clouds in the background looked very impressive, but all in all we still had a bit of good weather lying on the beach. To end this Sunday we had Pupusas in an El Salvador restaurant, they’re really tasty I can assure you. 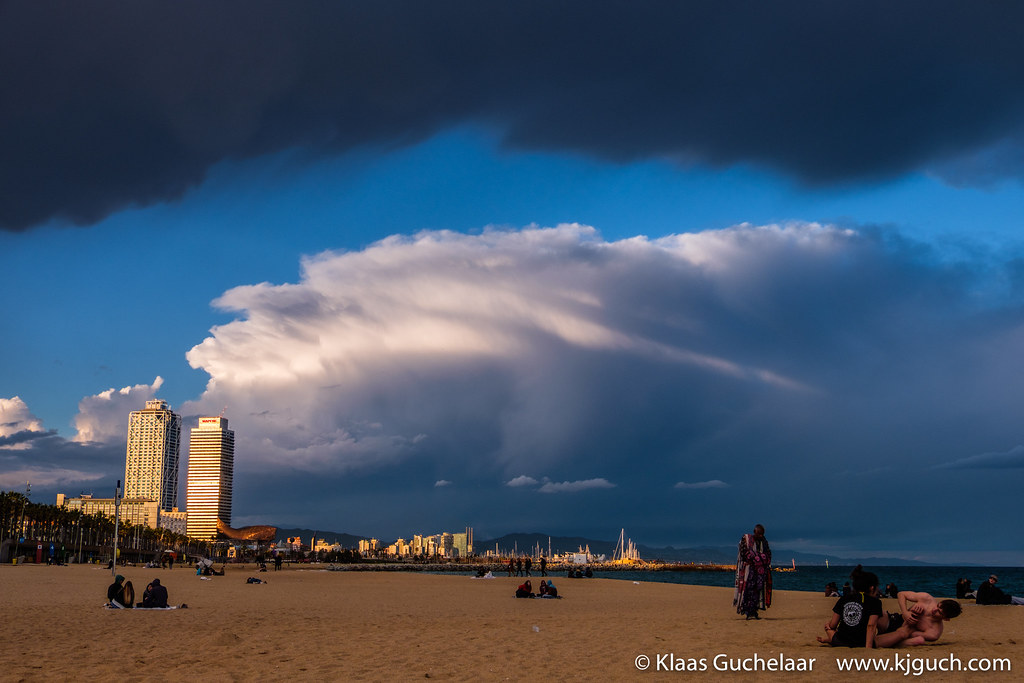 Monday was a lovely day with just the two of us, but without many exciting things. We did have a look at the Encants-market. 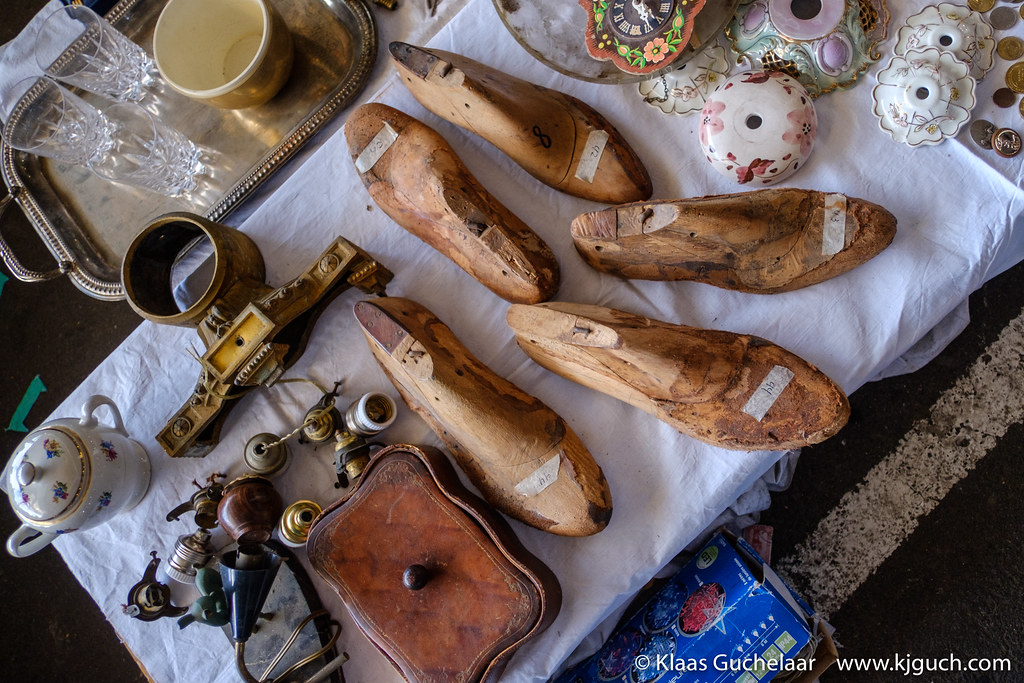 On Tuesday I took Monica to the train station, had a breakfast and just as I was about to head into the center of Barcelona I saw Mount Tibidabo in Snow and at the same time got a message and photo fro Monica about the same thing. At work Monica is a lot closer to the mountain. I didn’t hesitate an made for the mountain to take some photos. 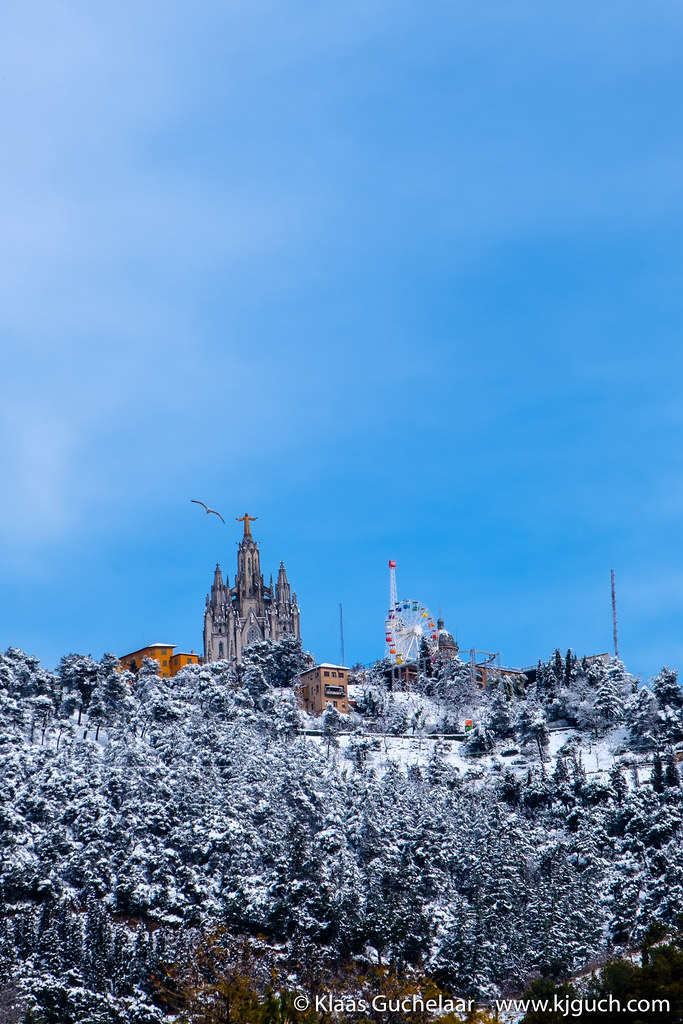 I didn’t want to go the normal route and hoped for some other views and photos with the snow. After a long way around the mountain I eventually made it to the observatorium, that turned out to be closed. I was also struggling through about 30cm of snow on my by now soaked sneakers. Whatever it takes to see something amazing as this! 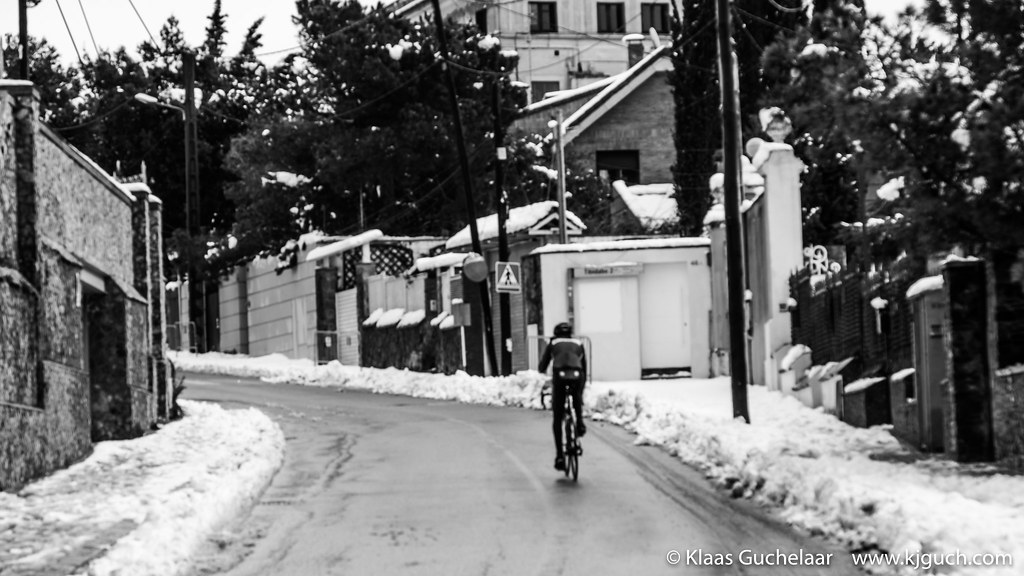 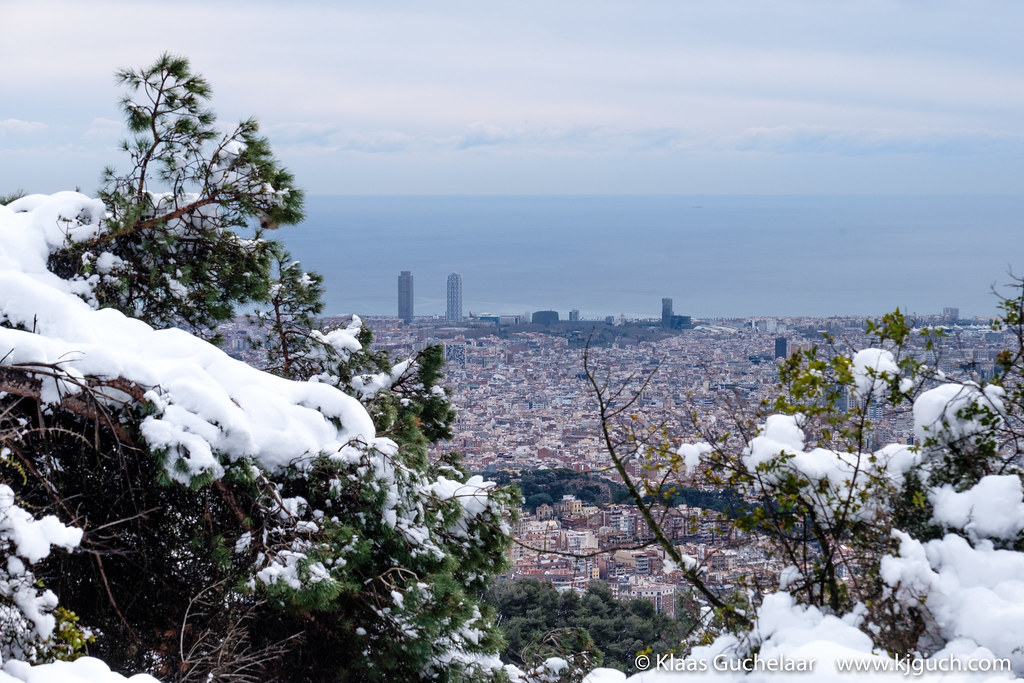 The way back down the mountain was a treacherous one along small paths that were hidden under snow and with water from the melting snow running down the path. 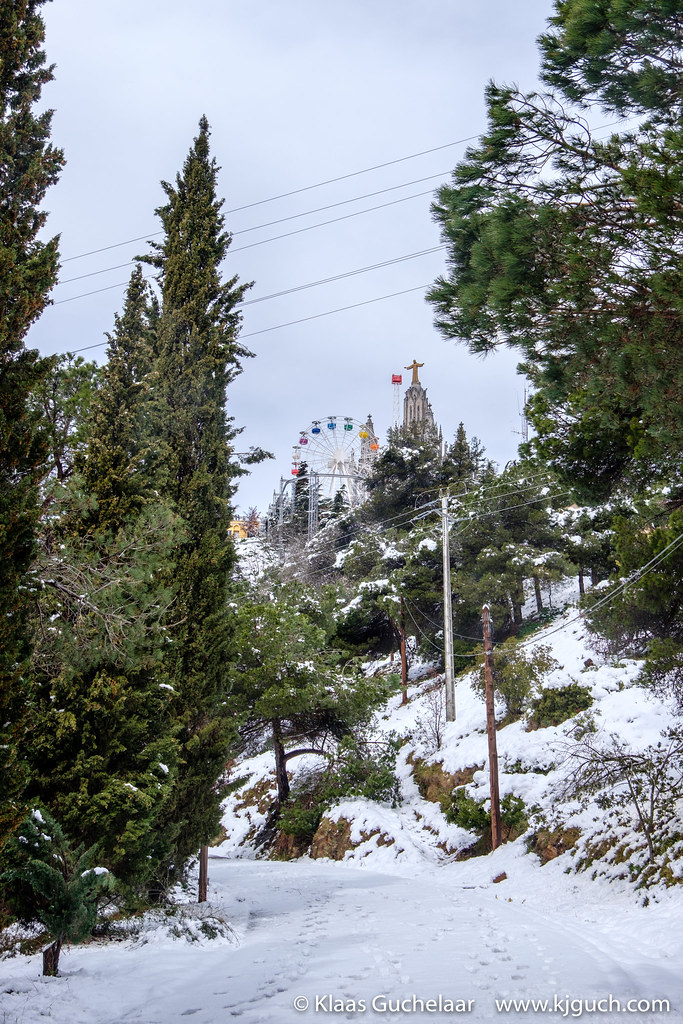 Eventually I got down the mountain and found the park ‘ Jardins Del Turro De Putget’ where I found not only a great view to Tibidabo, but also a fantastic view over Barcelona. 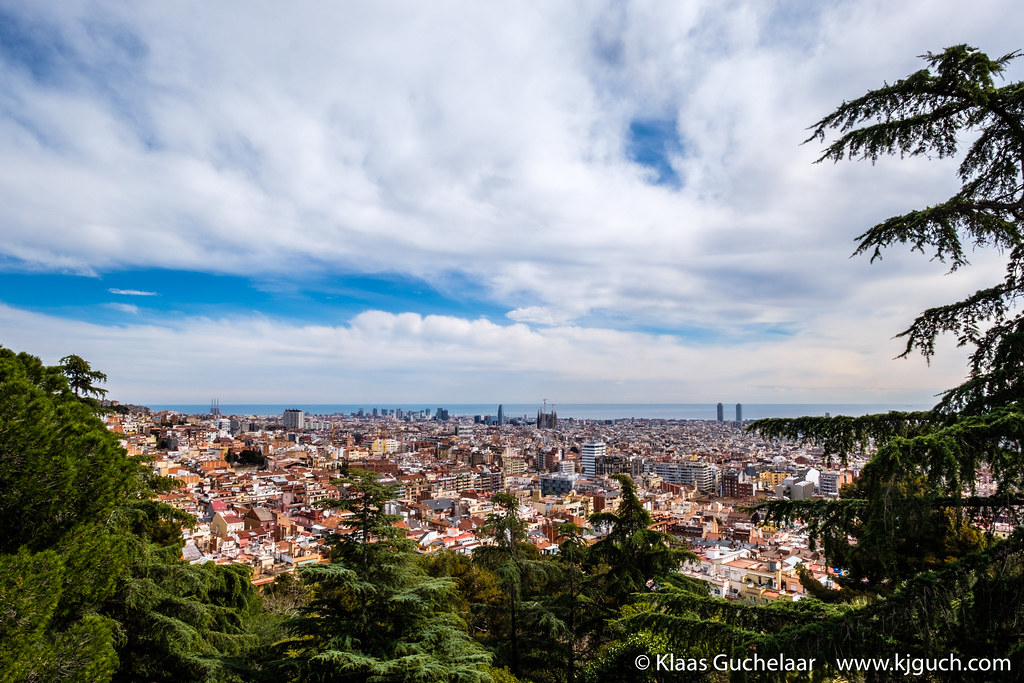 I walked about the streets a bit more in the afternoon, couldn’t feel my feet anymore anyway. In the Evening Monica took me to a lovely restaurant in Gracia for a delicious paella con pollo (sorry for the paella aficionados, but I just really don’t like ‘fruti di mare’). 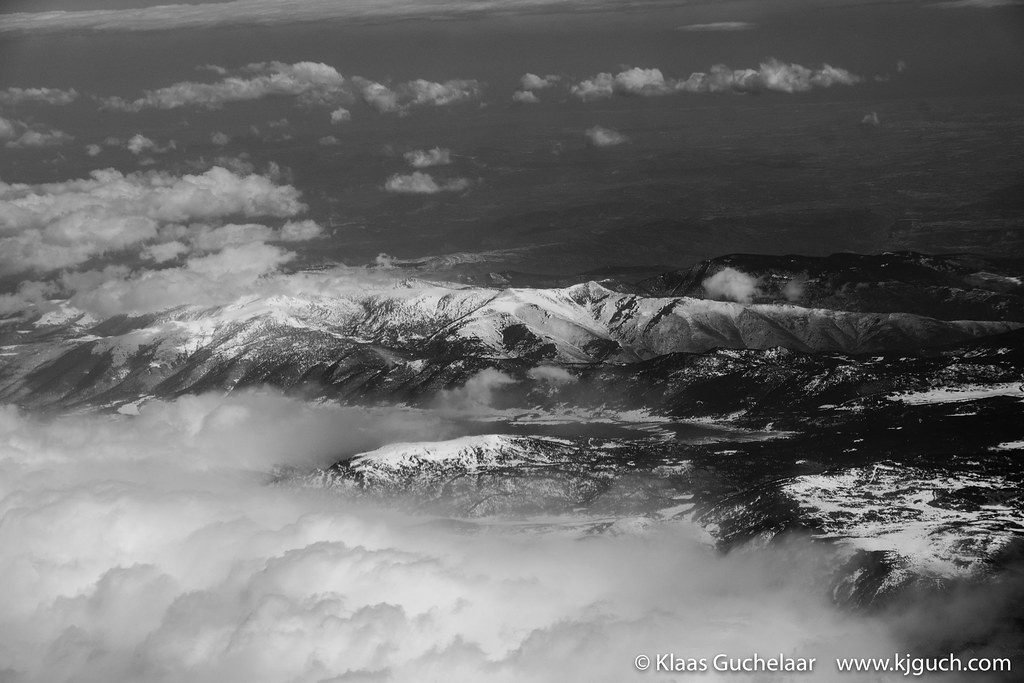 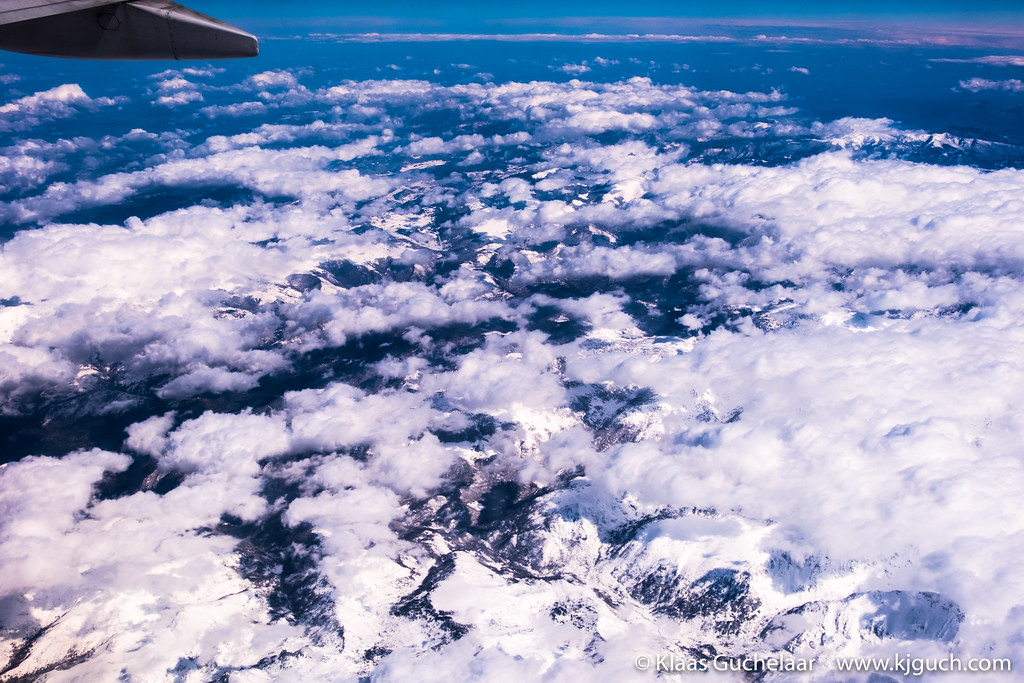 Really sadly on Wednesday my stay in Barcelona was already over. I walked Monica to the station one more time, had a last walk around Gracia and then began my journey back to the Netherlands. The Pyrenees had some great views along the flight and we flew along the Dutch coast on the last bit of the flight, which gave a far different view of the Netherlands then I usually have. 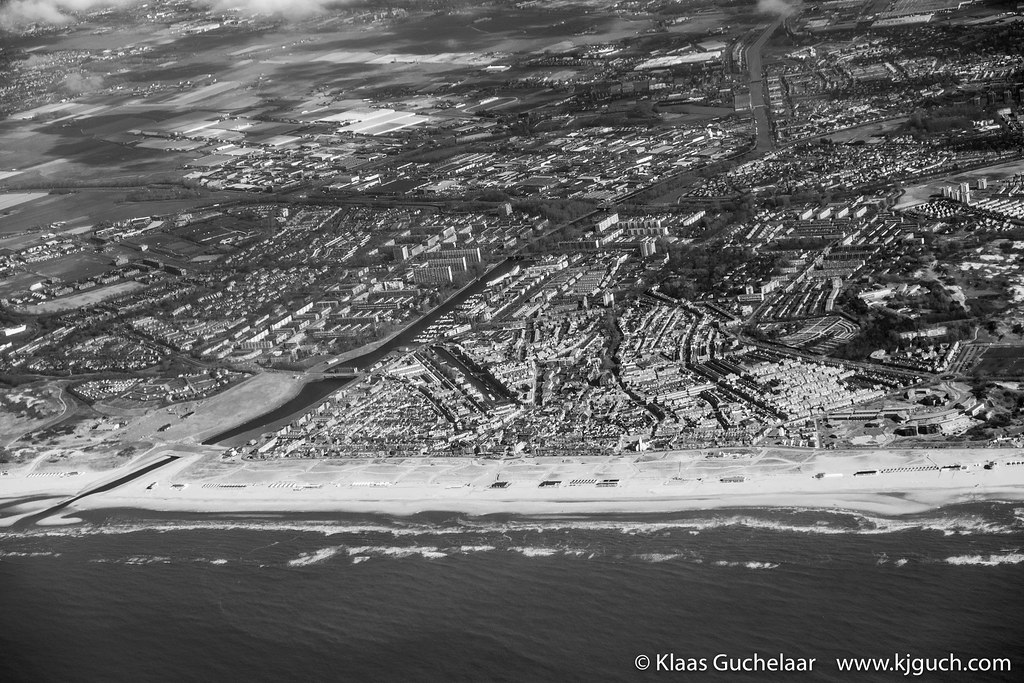 A train ride across the Netherlands later I was home just in time ti cast my vote in the municipal elections. The stay in Barcelona was way to short, but I’ll head back soon again!