It’s March and it has been two months since I was with Monica. And as it’s just been my birthday it’s a really good idea to celebrate it a bit longer in Barcelona. 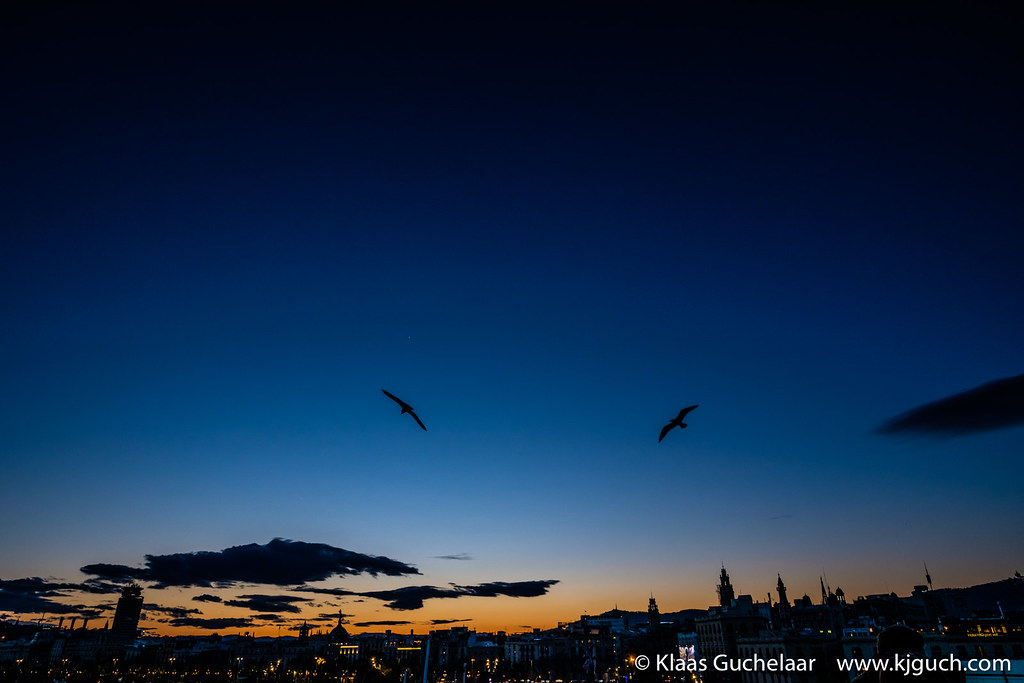 So on March 2, a day after my birthday I traveled to Schiphol through a cold and rainy Dutch landscape. The first sun I saw all day was at Schiphol moments before we took off. Luckily the weather’s a lot better in Barcelona :)

On Friday Monica had to go to work and I hit the streets of Gracia. It was Sant Medir that Friday, which meant that all over Gracia there were little parades with marching bands, horses and an enormous, more a staggering amount of candy. Once, back in 1830, this journey started as a pilgrimage by a local baker, now it’s a huge fest where tons of candy are thrown (and crushed) out into the streets. 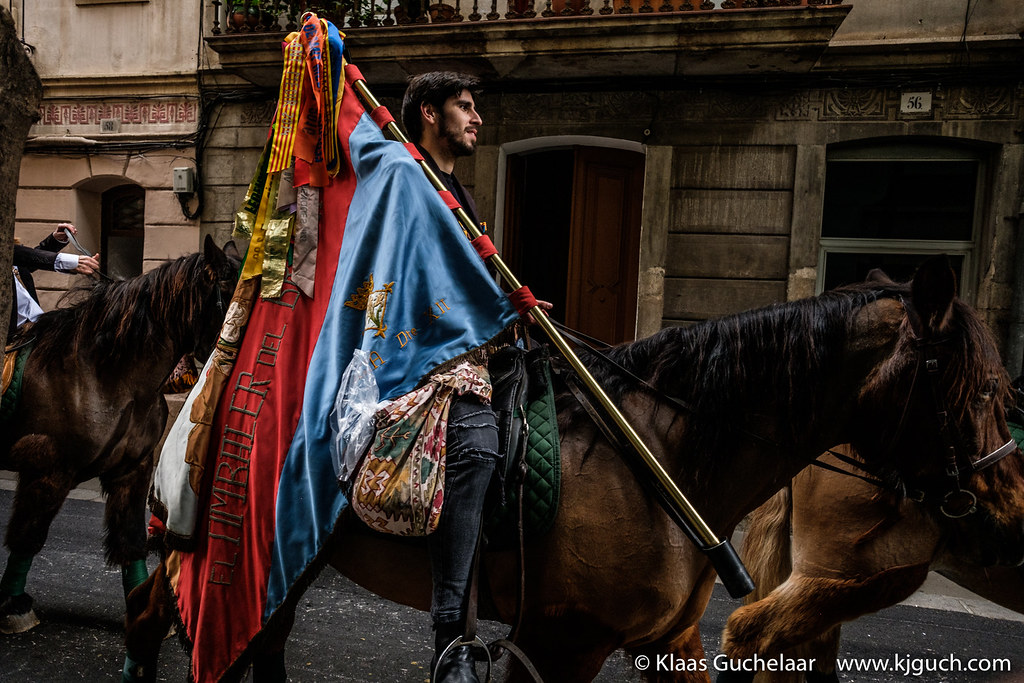 Children and adults alike carry home heavy loaded bags and umbrellas filled with sweet candy. The parades are a lot of fun to watch, especially with the ecstatic children on the sides of the street. 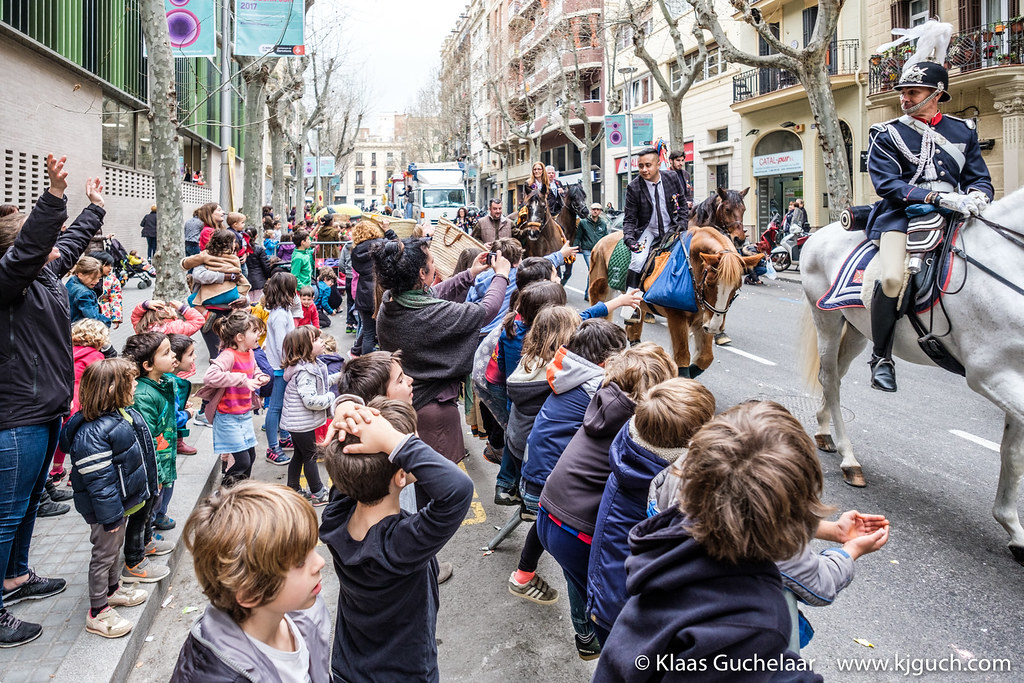 The only downside of this festival was the crushed candy in the streets, they stuck to my shoes like an extra sole and those in turn stuck absolutely everywhere. Stores even had carton boards on the floor to keep the floors clean. 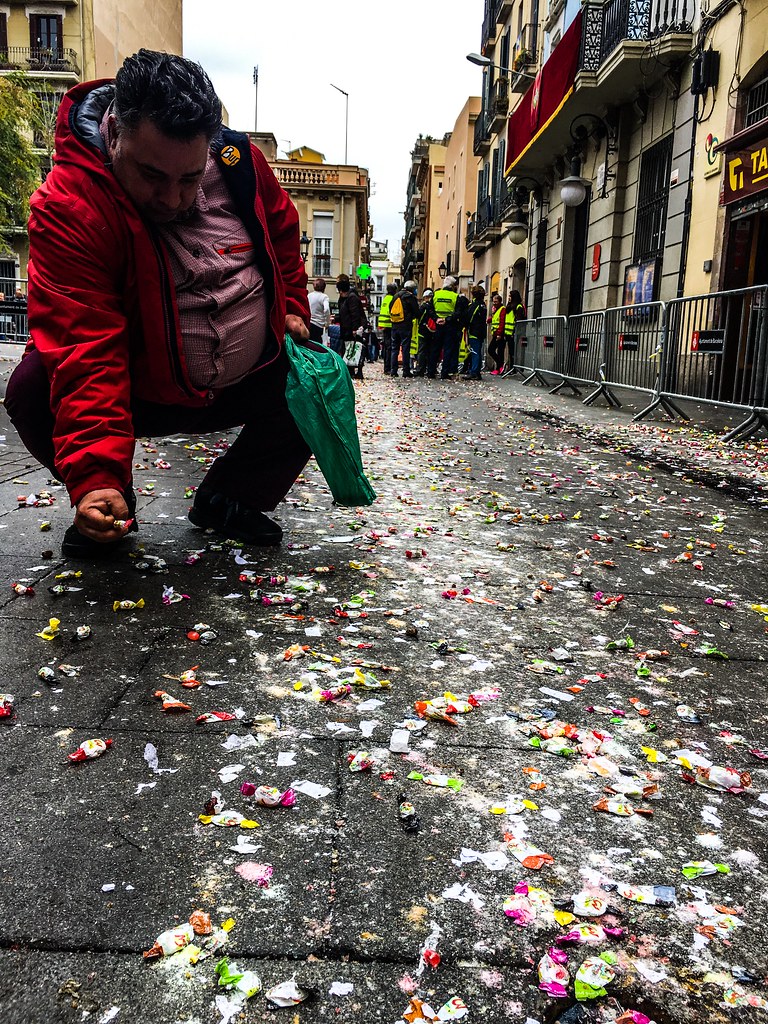 The parade went on in the evening, but we had more pressing matters. At the venue BArts, far away from the parades the French band Nouvelle Vague was playing. Unfortunately cameras were not allowed so I only did a few shots with the iPhone. It was a terrific concert and as part of my Birthday-celebration it was simply awesome! Muchas gracias, mi amor.

The weekend had started and and we visited Palo Alto Market on Saturday, but not before we first visited a photo gallery that happens to be in Monica’s street (and I had a long and interesting talk with the photographer Ian Sanderson) and we saw an huge flock of pigeons at Plaza Catalunya. It’s really a sight, especially as the birds are shood along by an almost equally sized horde of photographers (yes, including me) trying to get that one unique photo. Just like all the other photographers. 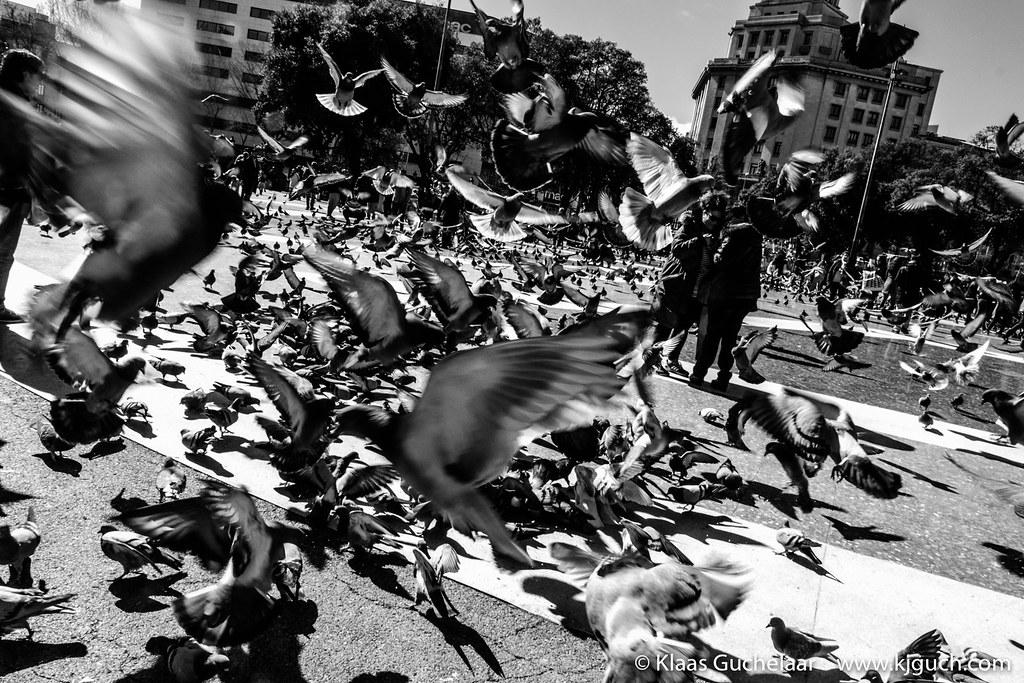 The Palo Alto Market is held in Poblenou every first weekend of the month consists of design, clothing, ‘bohème’ and concept stalls and above all many delicious food trucks with food variations from all over the world. Bands were playing, the sun was shining and the location is fantastic. Really: go see it if ever you can! 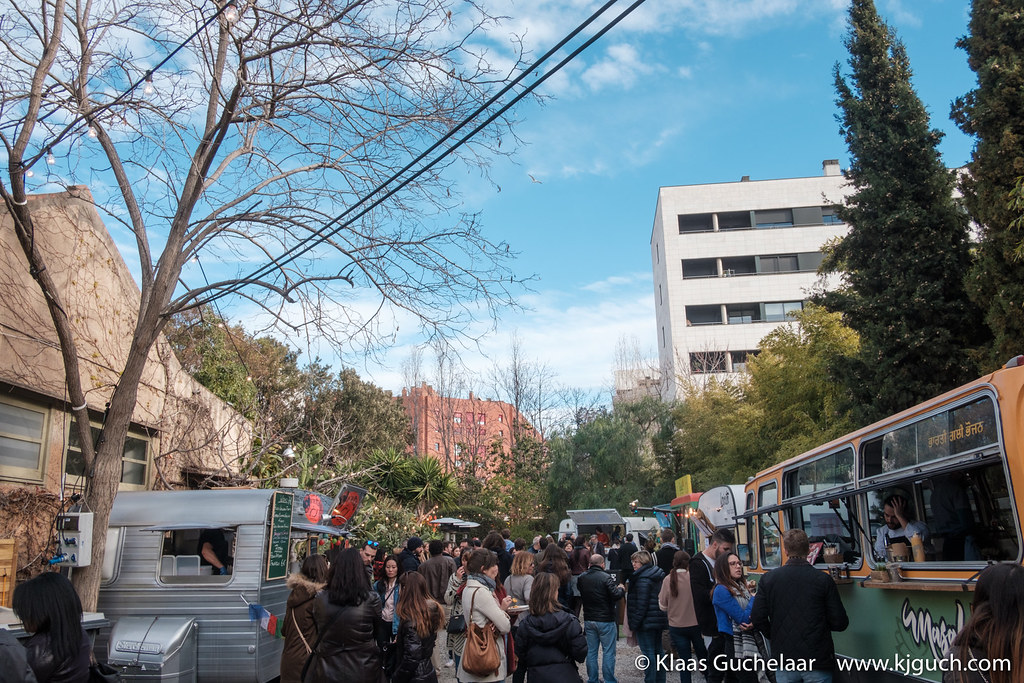 We ended the day on the rooftop of the Museum of the history of Catalunya at the harbour to see the sun set behind the mountains. A beautiful way to end a great day. Although… we weren’t completely done yet, we really ended the day eating calçots, the Catalan traditional season dish of sweet onions. Served with a sauce it’s really good (and difficult to eat). 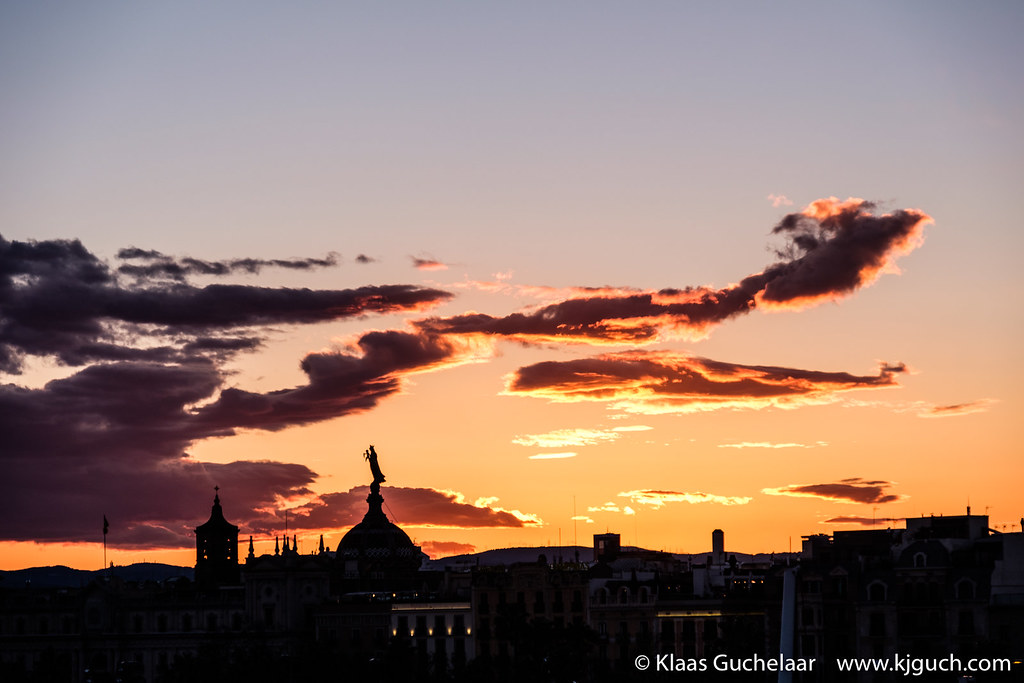 On Sunday we left Barcelona for a day and headed to the Costa Brava to visit Tossa de Mar. It’s a great location and very popular in summer when the beaches are filled with sun-seekers. But that’s definitely not the case now. And to be honest: I think I quite like it like this. OK it’s a bit windy, with hard hitting waves on the shore but it was really nice to walk in the village and on the beaches. The views are spectacular. 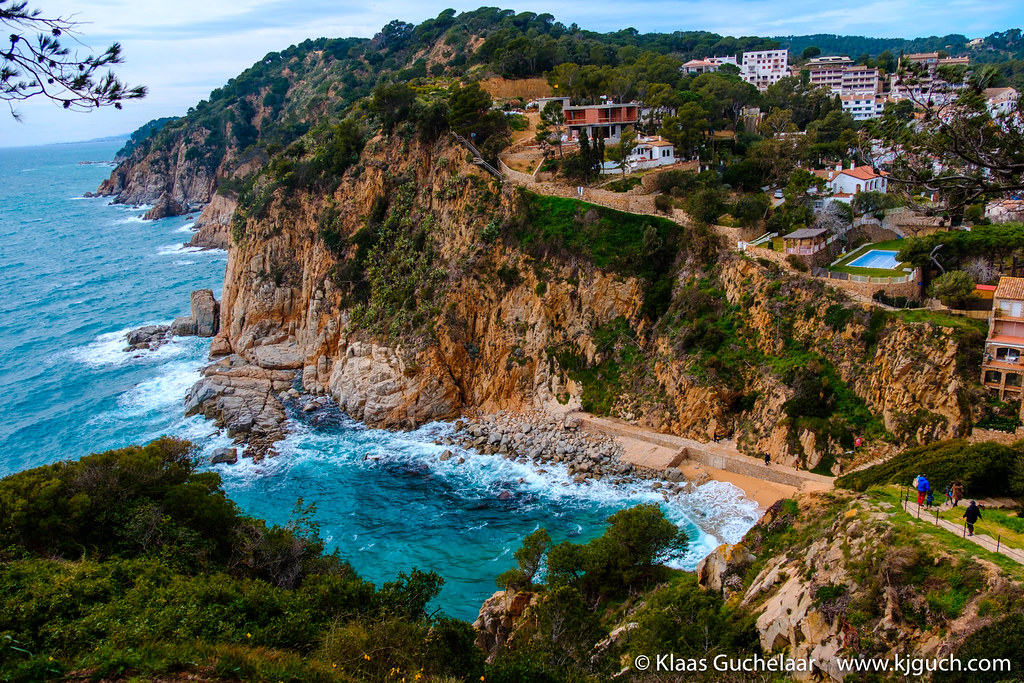 Doing my best to capture some waves, I got soaked through an through. The upside of that is that the candy-soles are now finally gone (and the sea might just taste a bit sweeter now)! 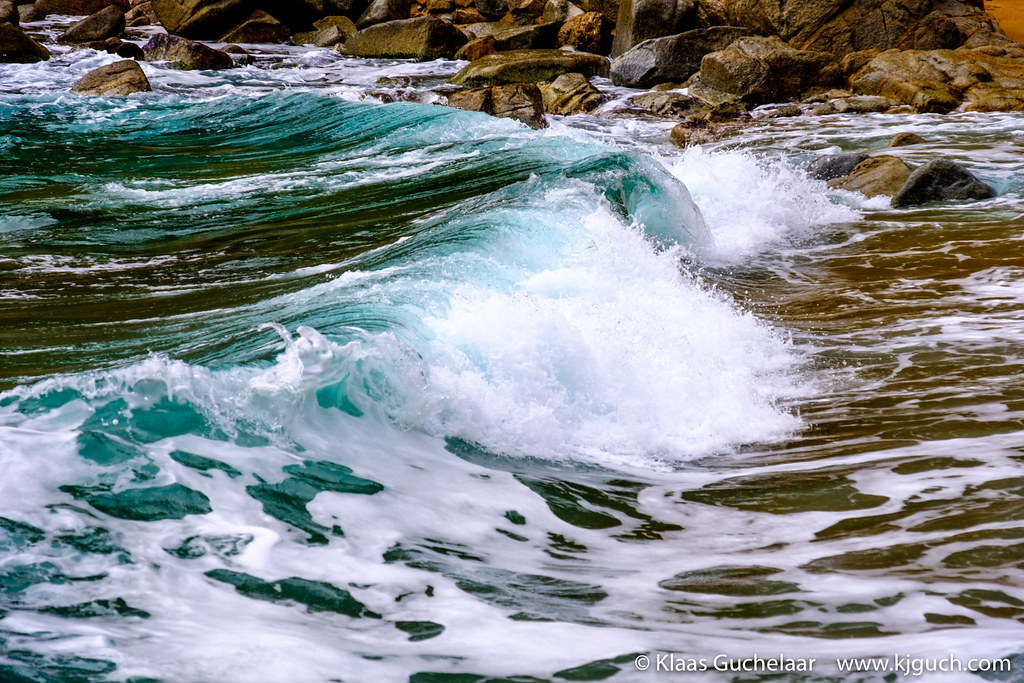 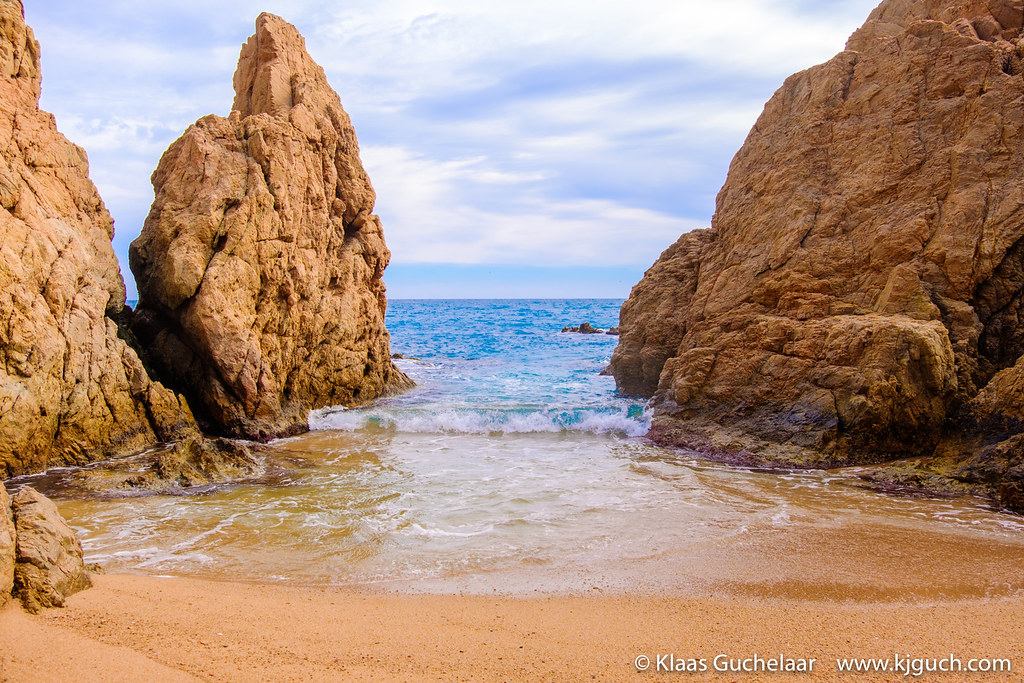 Monday was a great day! Monica had the day off and the weather was simply fantastic. Unfortunately -as it’s Monday- we found many galleries closed and even worse: also Nomad Coffee! But we did find a good exposition in the morning in Fundaction Mapfre with photos by Peter Hujar, a bit later we discover the rambla in Poblenou with many terrases and restaurants and in the afternoon we spend a good deal of time taking in the sun on the beach. Just every once in a while doing absolutely nothing is exactly the right thing to do. 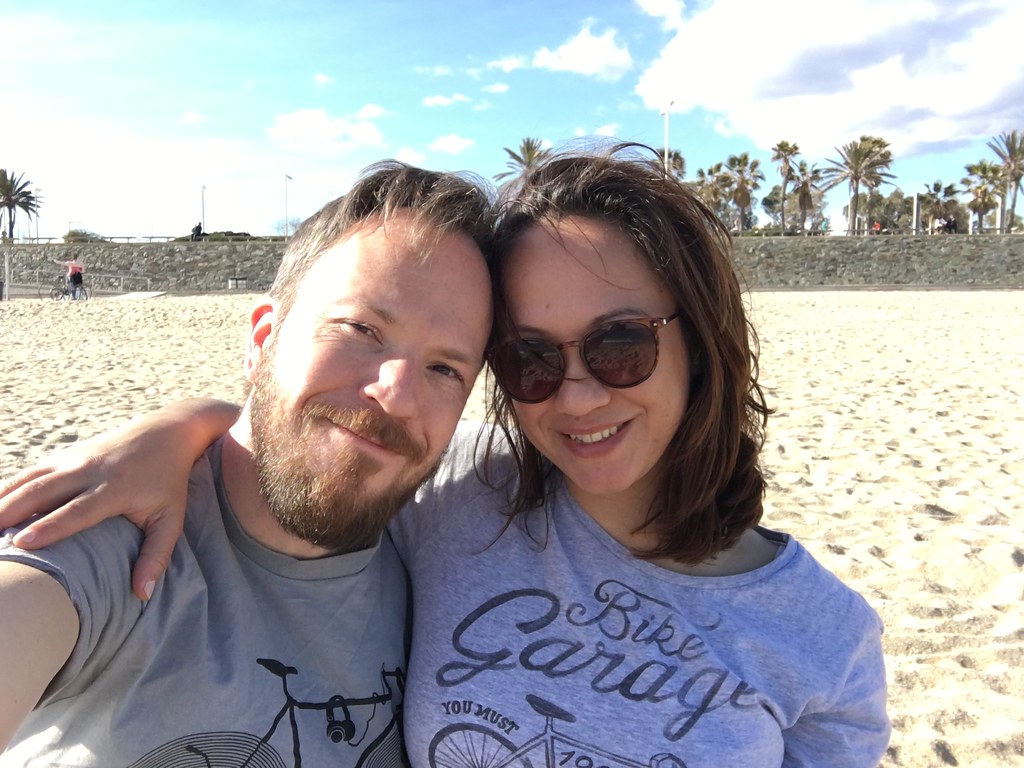 Tuesday was my last full day in Barcelona already. Monica had to go back to work again today and I had to entertain myself for a while. We had planned to meet for lunch at two in the afternoon. I first went to the Arc de Triomf as in one of the side streets you can find Galeria Valid Foto BCN. There is an exposition on Japanese town Tohoku on, an impressive collection of old and new photos. Plans to fill stock of coffee beans at Nomad are foiled as Nomad turned out to be out of stock itself. 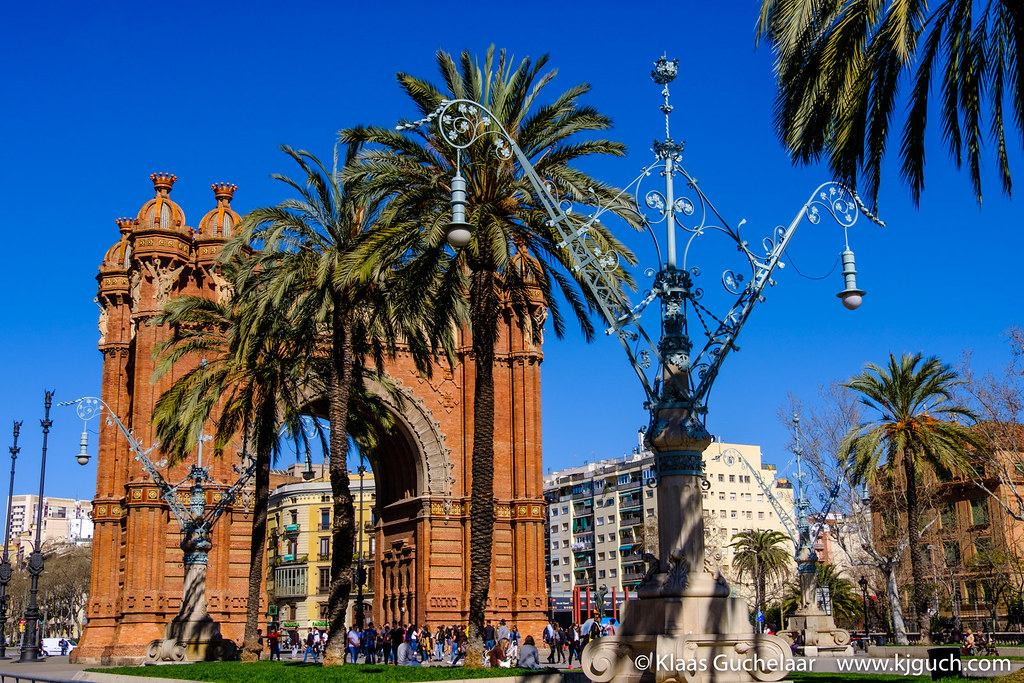 Walking around for a bit I then found myself at the Palau de la Musica, a place I have wanted to visit for a long time, but -especially in the tourist season- often it’s incredibly busy. Now however I could buy into a tour that was to start in a few minutes from then. I checked the time and guessed that the tour would last about half an hour and that would give me just enough time to make it to the lunch date.

But as the tour started, we first had to sit through an introductionary video that lasted a good 15 minutes(!!!) and that’s really too long. Luckily Monica just messaged me at that moment and we managed to reschedule the lunch meeting half an hour later.

The Palau de la Musica is a seriously impressive building, the history of the building (OK, the video had some purpose then, but the guide told more or less the same), the smell, the feel and most importantly: the light! It is easily the best looking venue I have ever seen. Period. No question about it. It’s jaw-droppingly beautiful. We first visit the external colorful balcony and then were allowed to visit the ground floor and the second floor of the venue. As musicians are practicing at the stage all day, we weren’t allowed to go right up to the stage, but that didn’t really matter, just being there is fantastic! 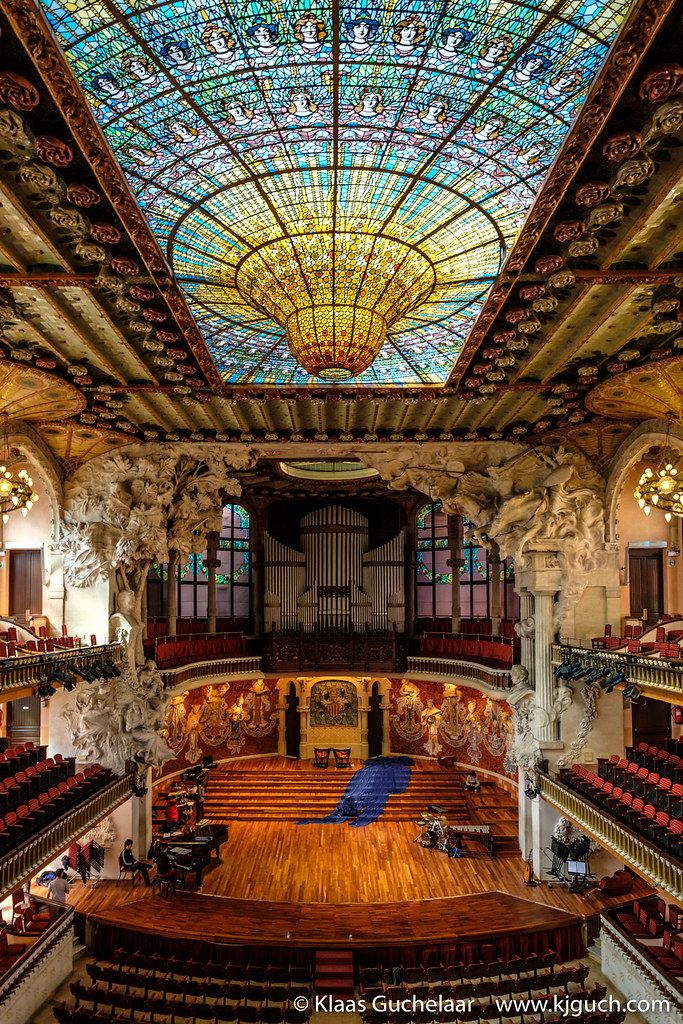 I ran, fretted and worried to make it in time for the lunch meeting, but the bus dropped me of exactly at the correct location and perfectly on time (even before Monica’s arrival). During lunch Monica mentioned that they were having a training-session at the Velodromo at six that day and that might be an interesting thing to visit. As it turns out it’s one of the best suggestions of this trip (thanks mi amor). 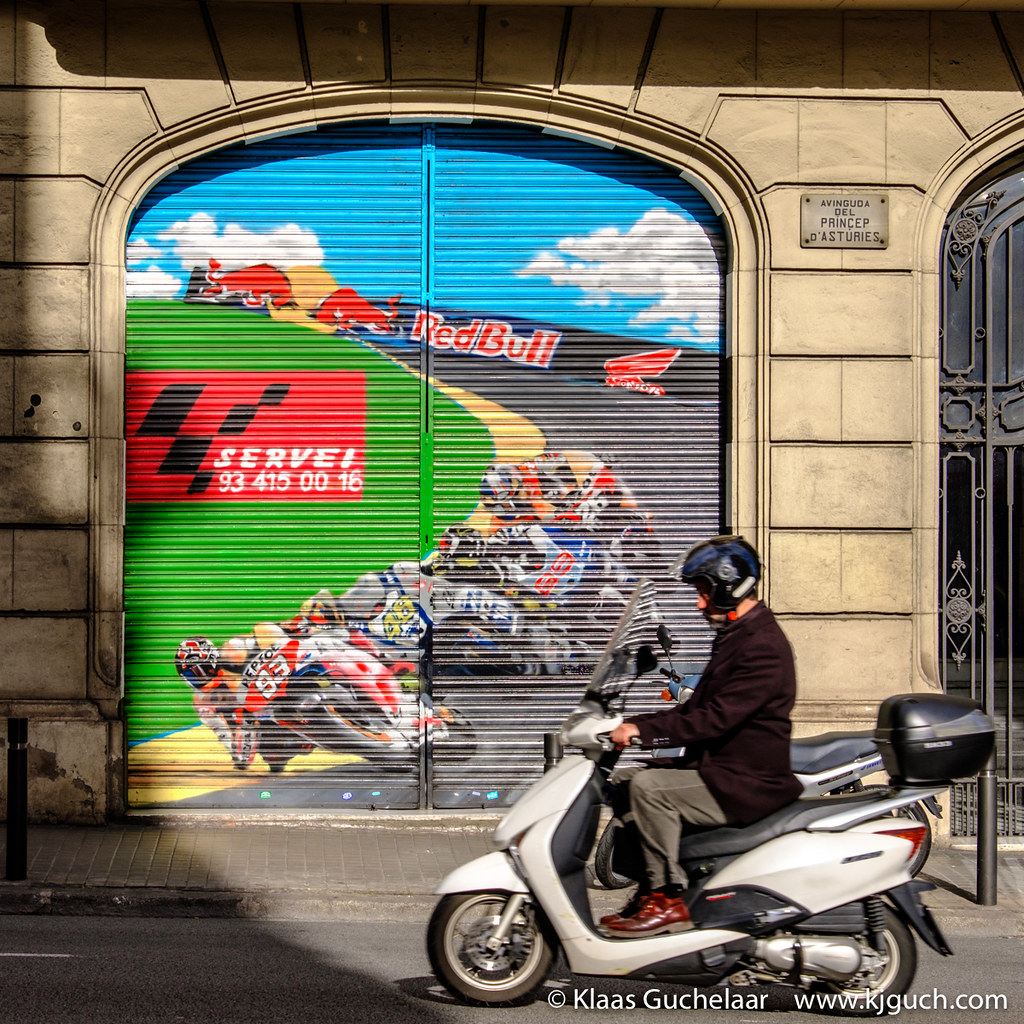 I visited the Velodromo -a cycling piste that was built for the 1992 Olympics- back when I came to Barcelona for the first time in 2014 and together with Monica we tried it again last year, but never found much cycling-use of the location, so to see cyclists on the track is for me as a cycling-lover somewhat heaven-sent. I love both road-cycling and track-cycling. Track-cycling has a special vibe. The dynamics at the piste make for interesting races, strategies and acrobatic cycling.

The training with groeps from Pista BCN (and possibly others, there were a lot of different jerseys) is great to watch and especially as the last sun of the day is casting some great shadows. I also decide I need a wider lens next time as even 14mm simply doesn’t cut it here. As I’m about to leave, a few of the cyclists ask me to come inside to exchange email addresses so I can send them some of the photos and I get to shoot a few more photos from the inside. Also I have standing invitations to next time bring my Bianchi to Barcelona! Now that’s a great plan :)

In the evening we went to El Nacional, it really is one of my favourite restaurants in Barcelona with great atmosphere. good tapas and a very nice last night of my stay in Barcelona.

And suddenly it was Wednesday. I accompanied Monica to the metro station in the morning to see her off and had a good two hours left before I had to leave to the airport myself. I wandered the streets of Gracia and then -close to Monica’s apartment- I found Apinyo, a bike-courier service that also sells cycling-items. I spotted a set of cycling-socks that match my Bianchi. Unfortunately they don’t have my size in stock, but I chatted with the guys for a while and learned that they’ll start Sunday cycling rounds in April and got invitation number 2 to bring the my bicycle along next time, so there’s really no escaping it anymore: next time the Bianchi is coming with me to Barcelona! 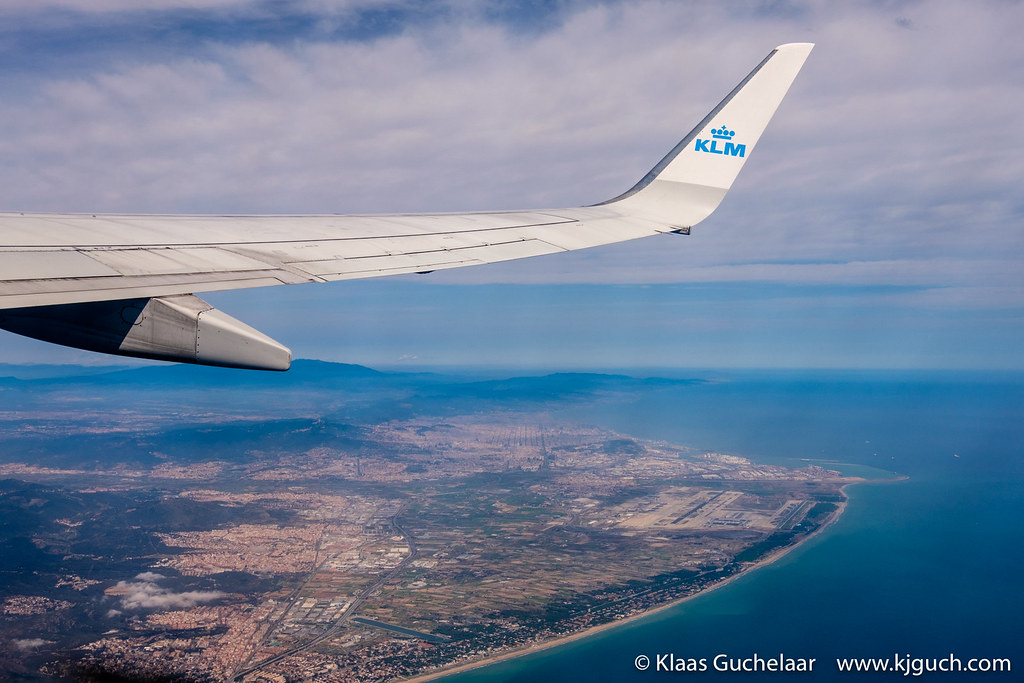 The plane left a little bit late, but the crew flew extra fast to deliver us back in time to gray, dull, rainy Amsterdam. It’s only a few weeks now until we will visit Lanzarote with the whole family. 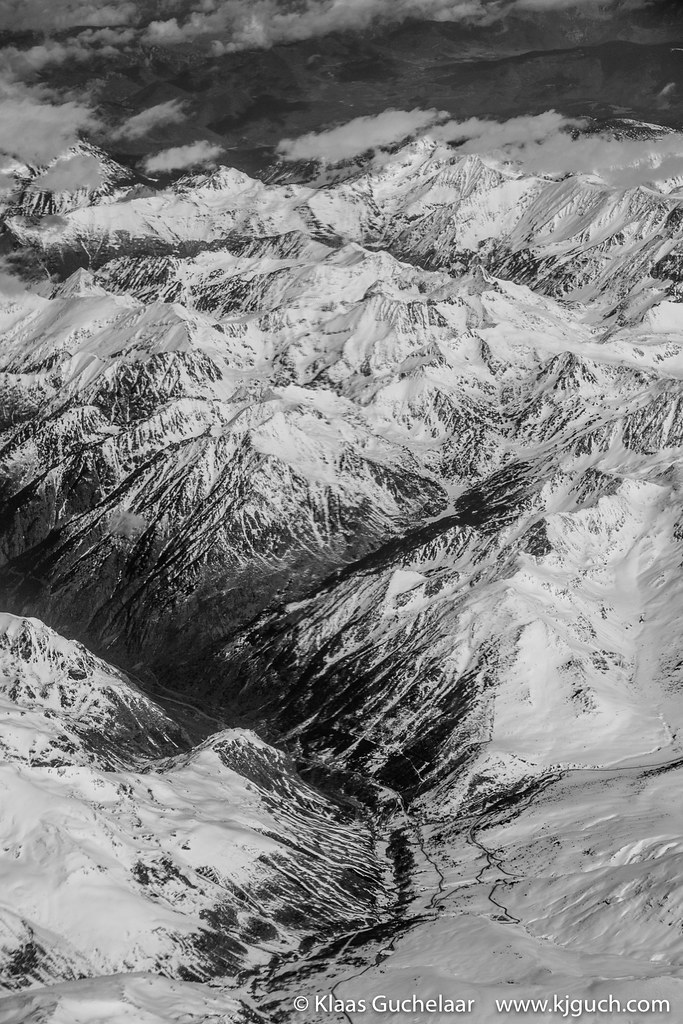