Ending 2015 in Barcelona with Monica was a great way to celebrate the beginning of of a new year and so why not repeat it? Luckily Monica agreed, so for the last few days of 2016 and the first four of 2017 I was in Barcelona again.

The flight to Barcelona wasn’t very interesting visually as I started with a delay in the flight because of heavy fogs in the Netherlands and we had a blanket of clouds all the way to the Pyrenees. The sunset was a nice view though. That made up a bit for an otherwise quite boring flight :)

From the airport to Placa Catalunya didn’t take too long and after a short ride to the apartment and leaving the luggage there, we headed  into Barcelona to enjoy the evening together.

And then it’s the very last Friday of 2016! Monica’s last workday will end at two in the afternoon so in the morning I head out on my own for a bit. I wanted to visit a few stores in the neighborhood (there’s a terrific second hand English bookstore called Herbernian in Gracia) and also I really want to get a better feel of the area so as to find metro-stations easier and to get to my way around the streets in general and I think it’s no big surprise: I really like walking around a bit.

After work Monica joined me and we headed into Barcelona together where Monica found me a fantastic and gorgeous bicycle store: My Beautiful Parking, where she got me the perfect present: my new cycling jersey.

On Saturday no photos. Actually every once in a while it’s very nice to be without the kit (just not too often!!!). It was a lovely lazy day where we did the last bits of shopping for our outfits for the dinner of the evening while we were walking down Diagonal street (come to think of it, it wasn’t to lazy at all as I had to rush a bit in the end of the day to find a waistcoat and a bow-tie, but boy did we ever look smart). 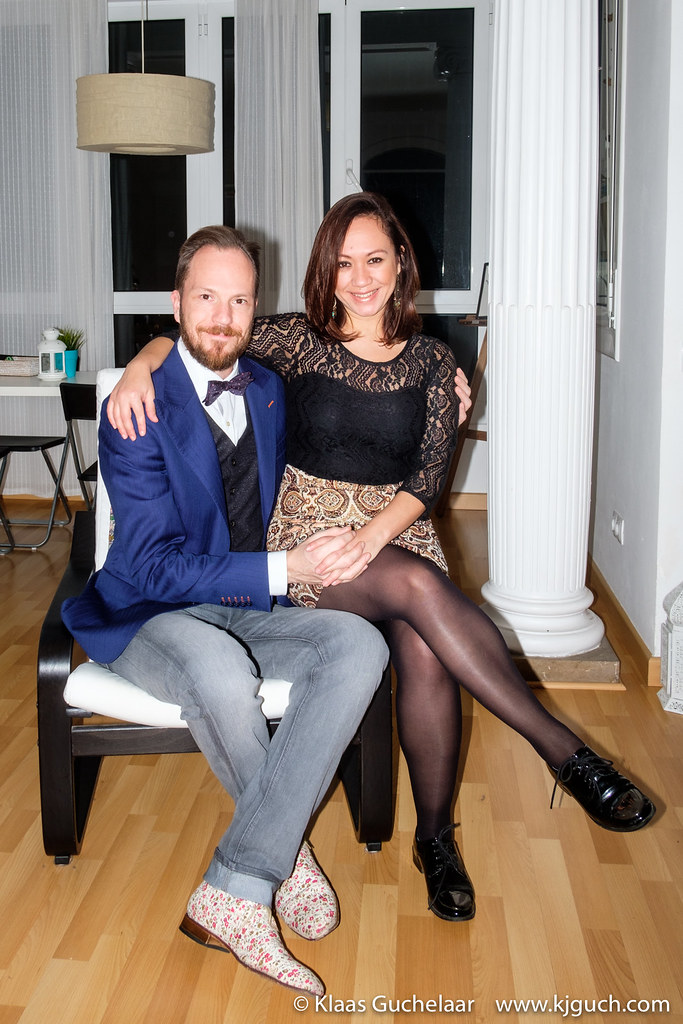 For New Year’s eve we had a delicious dinner at a restaurant at Plaza Real where we celebrated the end of the year together. Muchisimas gracias to the year 2016: you were a fantastic year with many wonderful shared experiences and travels but now it is time to welcome 2017!

The first day of January was a good day for taking things slowly after the New Year’s eve parties. It’s Sunday, the very first day of the year and so there aren’t many activities to visit today. However, we do finally get the cartoon-portraits made that we said so may times we’d do. With Monica’s long black hair and my beard a lot of charcoal was needed…

In the evening we went to the Sant Pau hospital where they did a ‘mapping’ on the building’s facade in celebration of the Winter solstice. It looked very impressive and I especially liked how (even more so in the photos) the top of the building looked like a meditating Buddha or possibly a Hindu deity. 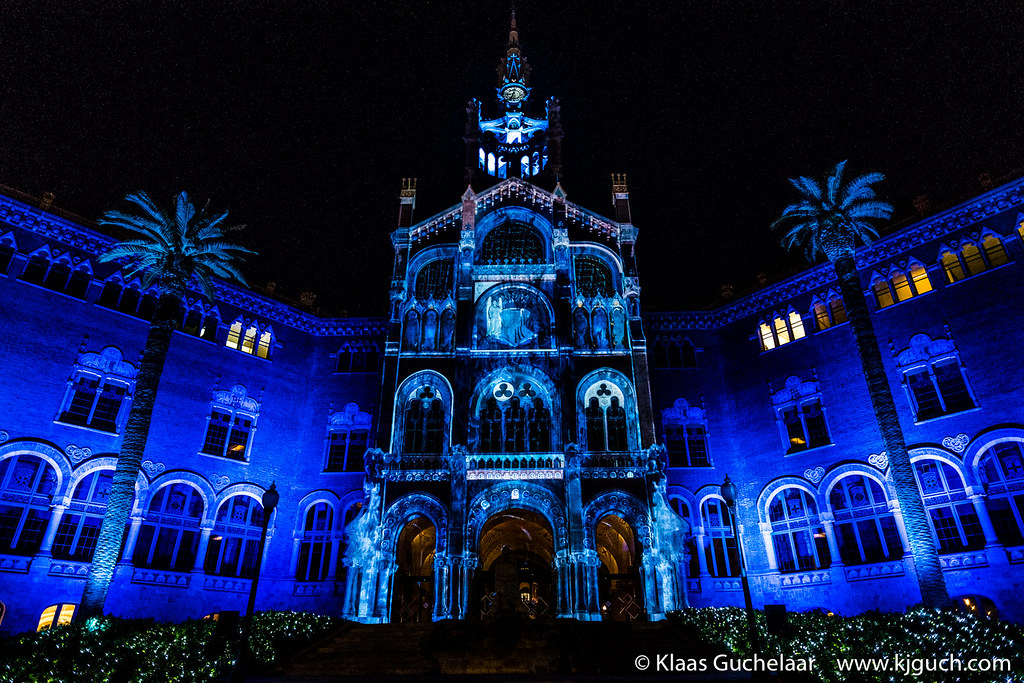 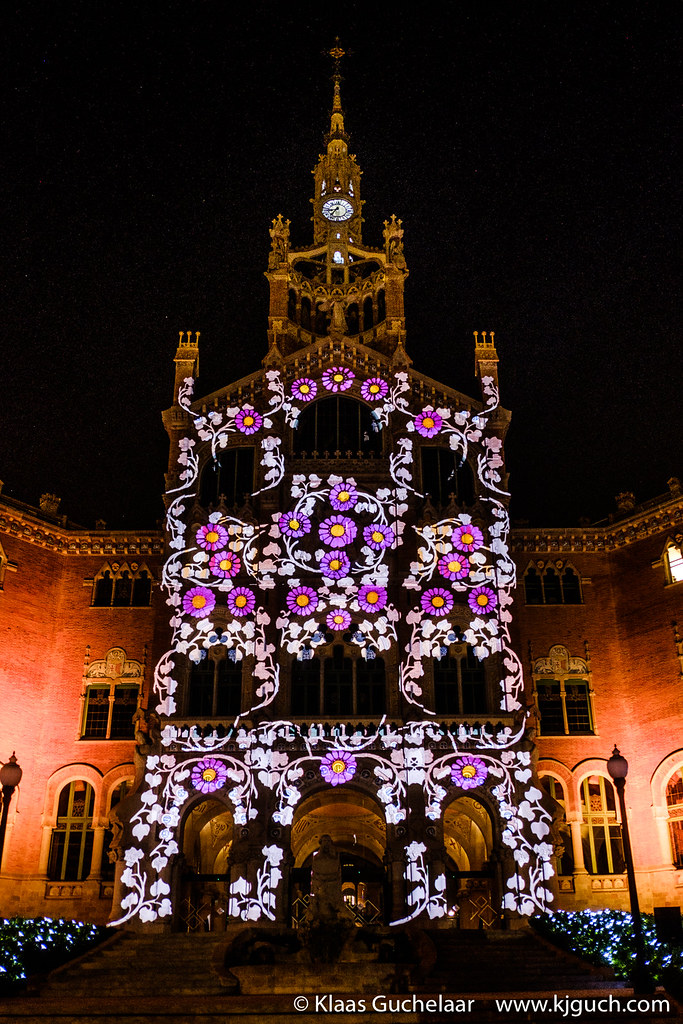 And then all of a sudden it’s Monday already and Monica has to go back to work. I on the other hand wander the streets some more thinking about new ideas for photography. I’ve been to so many places in Barcelona already in the past two years that I need some fresh ideas and new ‘projects’.

Luckily I  have one of my Barcelona guides with me and use it to find a route to walk in the Gothic quarters and I visit both the Santa Maria del Mar church and the Catedral de Barcelona. Both fantastic examples of Gothic architecture and very imposing buildings. There are many other fantastic buildings to be seen, but I often wish I could just get a little higher in places of a better shot. Maybe I should just turn pro-photographer in Barcelona ;) 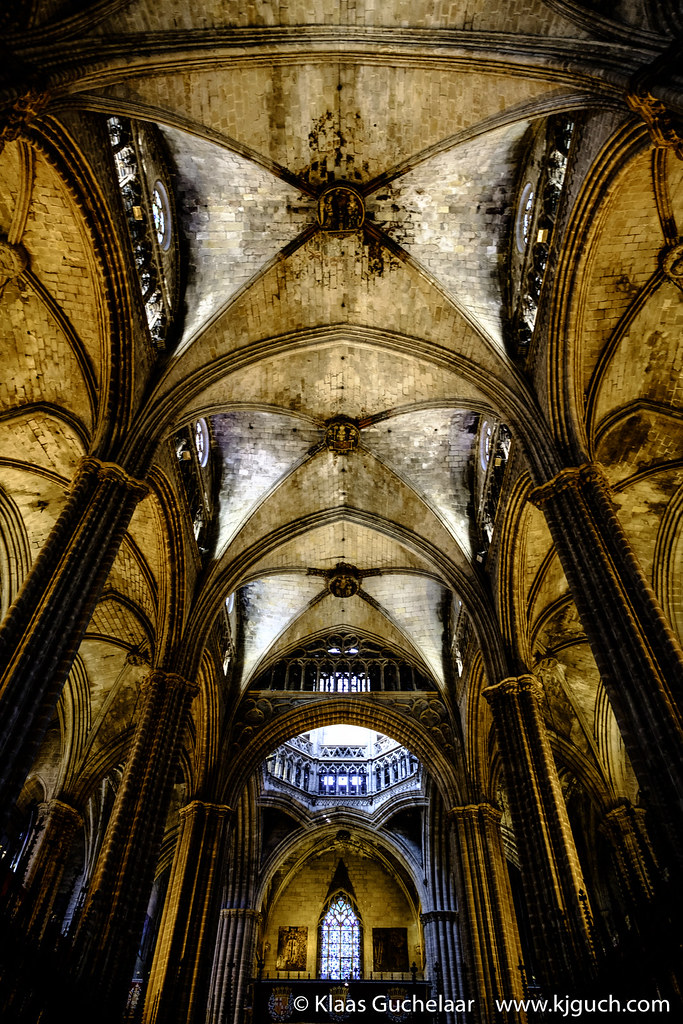 An idea that has been brewing is to do a bit more panorama-photography and when Monica and I meet up during her lunch-break, Monica suggests the Montjuïc and that’s a splendid idea. Before I head out for my afternoon walk, I first pick up a book filled with panorama photos of Barcelona with some breathtaking views, always good for inspiration. Unfortunately I missed that the language in the book is Catelan. I can read a little bit of Spanish now, but Catelan is a completely different thing. After dropping off the book in the apartment, I take the metro to Plaza Espana, walk past the museum MNAC and head to the Olympic Stadium to visit the area over there.

The Olympic Stadium is actually open today and there are some activities going on inside there too. I can only too well remember the enormous hike I did to find this place the first time I was in Barcelona when I took an enormous and unnecessary detour.

Getting from the Olympic Stadium to the castle of Montjuïc is a bit of a hike, but luckily there’s also a cable-car that brings you all the way to the top. The view from the cart is very nice, not having to walk the whole bit is even nicer.

I decide to enter the castle another time as the sun is hidden behind clouds and the light is already fading a bit. In hiking around the castle I do find some interesting views and then I’m done for the day. I head back to the apartment to find Monica home already. I leave the gear and we head out for a lovely evening in the center and taking a dinner at El Nacional.

On Tuesday I at least have a plan for my photography and that makes walking a lot more fun and less tiring. I head out to the foot of Montjuïc for a few photos and from there walk to the statue of Christopher Columbus. The statue is mounted on top of a tall column that you can visit for an elevated view. Unfortunately after one and a half panoramas the battery of the camera dies and all four other batteries are back in the apartment…

So…. A ‘short’ trip to the apartment and back again later and I’m ready to continue the day’s wandering. I first head to the port where I catch a touristic ferry that does a short trip at sea along the coast. Next time I’ll take the pirate-ship as that goes a bit further. But for this time it’s a great start and leaves me with enough time in the afternoon to walk along the beach.

Because that was the main plan: to walk along the beach for a long while and shoot some panoramas from there. Some of the panoramic shots took me nearly 50 photos to shoot (and so was very unfortunate to find out that Lightroom can only do 30 photos in one merge) so I filled up the memory card pretty fast.

Also I take one another little side-project in shooting waves. They’re not the huge waves of the popular surfing locations, but it’s a start and something new to work on. When the waves are willing, they have something special about them. They are moving, rolling, strong, powerful and in the same time they’re very fragile. 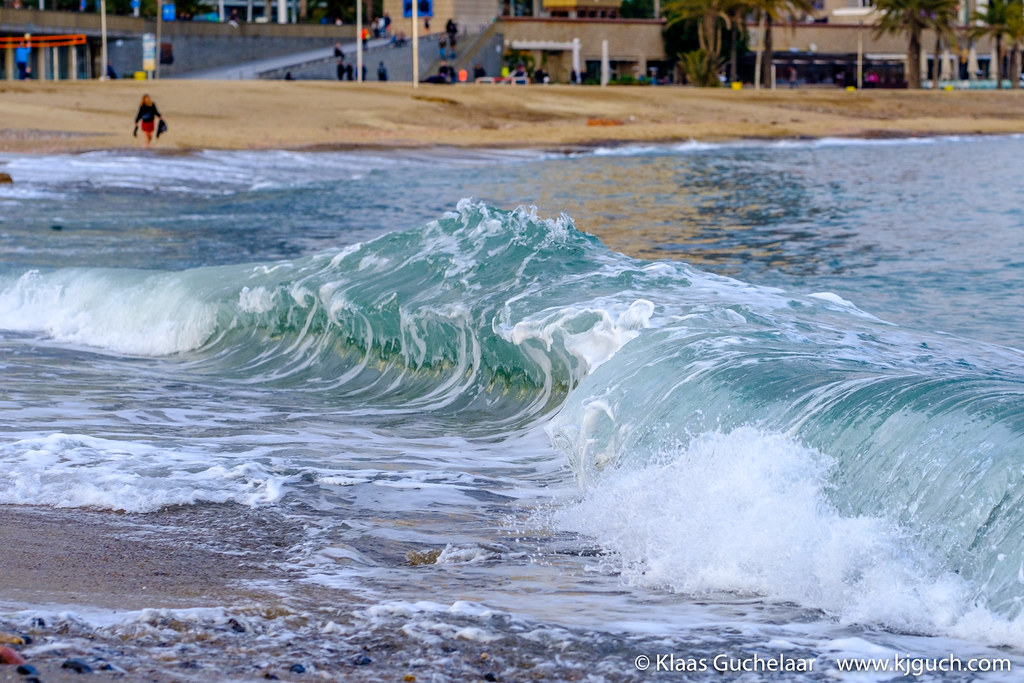 By the end of the afternoon I walk back to the center and just have time for a panoramic shot of the cathedral as the sky clears up and then head back home to find Monica. Her workday is over and I leave the camera behind when we head out for the evening together. We find a terrific new bar with a jazz-concert and that’s simply awesome. I do so love the whole music scene in Barcelona, there’s always something on somewhere.

Since Wednesday is my last day in Barcelona, Monica took the day off so that we can spend my last day here together.

We start the day relaxed and head to Serra de Collserola, the mountain range where you’ll also find Tibidabo. We don’t go all the way up though, halfway you enter the Serra de Collserola park. This is a huge area where you can easily spend a whole day (which we’ll certainly do next time). For now though we just enjoy a nice walk with some terrific views over Barcelona.

Back in Barcelona we have lunch and then -sadly- I have to pick up my luggage and head to the airport. With quite a bit of luck there’s no waiting anywhere. I can drop off the suitcase, walk straight through customs, head to the gate where I can immediately board the plane. The flight home is much like the flight to Barcelona… The view is limited thanks to the fading light and soon it gets completely dark. Funnily enough the (Dutch) pilot decides to give a lesson in topography as we make our decent in the Netherlands, pointing out what cities the lighted areas are that we can see from the plane. 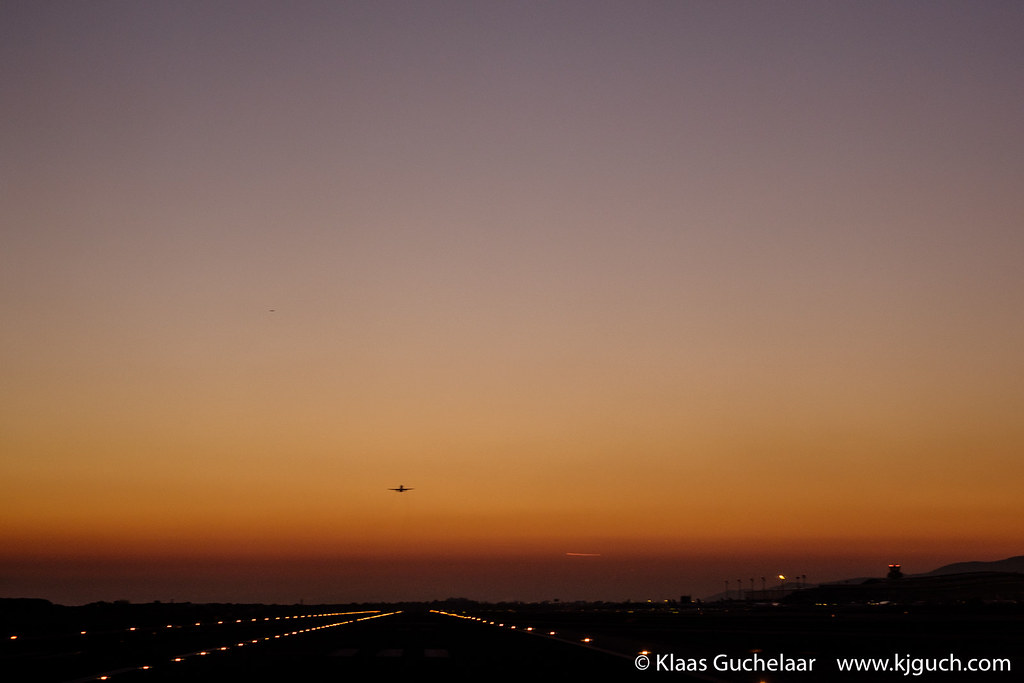 A train-ride later I’m picked up from the train station in Assen by my dad, driven home and that’s the end of this trip again. We’re already planning the next one, so it shouldn’t be to long before I head out to Barcelona again :)